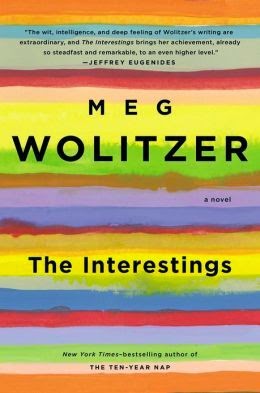 
It all begins in 1974, the summer that Nixon resigned, when six teenagers at an art summer camp create a lifelong bond. The Interestings follows these teenagers through out their college lives and well into adulthood, revealing how people change but the bonds that hold friendships together change too. Although all six of these friends are artistically talented and have the world at their fingertips when they first meet together, those talents don't necessarily lead to the fulfillment of dreams and success in later life. This novel is an intricate depiction of what it means for people to grow and develop, finding new dreams along the way, or maybe settling for much less than they originally set out to find. The added interest of these people being friends and loving each other through out all of these decisions weaves together a creative and interesting story. Most of the original six friends remain in close contact throughout their adult lives. Jules initially aspires to be a comic actress, but eventually adapts to a more practical lifestyle. Jonah was a gifted musician, but stops playing the guitar in order to accommodate different interests he finds along the way. Ethan and Ash, however, hold to their original artistic dreams and find success in them, as well as wealth that allows them to continue to expand their dreams and help others achieve their own. Goodman and Cathy have very different stories, ones that depict the loss of dreams and moving on in ways that are more stoic, even morose. In many ways their original talents shape how they live and the routes they take as they move through life. The Interestings takes the reader on a journey through the ways in which talents shape us, as well as the very nature of jealousy, class distinction, loyalty, and how all of these things can change over the course of one's life.

All six main characters are complex and hold their own independent power. Even though more time is spent on certain characters, I still felt a connection and deep understanding of each of them. Wolitzer has a unique writing style that spoke to me throughout most of the novel, but at times it felt abruptly vulgar and shocking, while at other times it would lull into a slow stale pace. The parts I am describing as vulgar aren't necessarily done badly, if anyone can write vulgarity well it appears to be Wolitzer, because those moments became both comedic and endearingly honest. However, if you don't want to read a book that has moments of extremely detailed genitalia, then this book is not one you would want to read. The stale parts I am referring to didn't necessarily drone on for chapters, but they did linger for longer than I found entertaining. The book is not an epic drama, indeed it had many dramatic elements, but there were times when I didn't seem to care much about how the drama would resolve. I was continually invested in the characters and at times I believe that is the only reason I cared to continue and find out how the drama did wrap up. I loved the organization of the work, which also helped me to remain curious, because it jumped between time periods in the character's lives. One chapter would have sections detailing teenage years and then it would jump in the next chapter to adult life, then the next chapter would be college years, etc. I found it to be a very compelling way to write such a story and give hints along the way to certain issues the characters had, instead of laying it all out chronologically, which probably would have made me much less interested in what was happening. Overall I enjoyed reading it and found some gems inside, but I don't plan on reading it again and would only recommend it to individuals who do not have aversions to detailed descriptions of sex/nudity.

I chose Tab as the drink to be pared with this book because, not only did the characters enjoy drinking it when they were young, but I find that it has a very strong taste that you either genuinely enjoy or you don't. I think this would also end up being most individual's experience with this book. There are also people who might drink Tab, and read this book, simply because they enjoy the nostalgia it invokes. There are many connections during the course of the novel to political events and pop culture during the 70s and 80s. If those years were your prime years of growing up as well, it might be a fun read for you to think, "I remember where I was when..."
Posted by Folded Pages Distillery at 2:06:00 PM