Well, it's been pretty quiet around here for the last few weeks.

Between traveling, vacations, and a few personal things, there hasn't been much time for reading.

I brought Laline Paull's "Bees" with me when I took the babe to North Carolina to visit my parents, and I didn't read one single word of it during the whole ten days I was gone. Whenever I am visiting family, reading makes me feel guilty. ha. I feel like if I have time to read, I should be using that time to go have quality, memory making experiences with people I only see in person once every 6+ months. Anyone else feel that way?

This is probably my favorite picture from our vacation. ha. 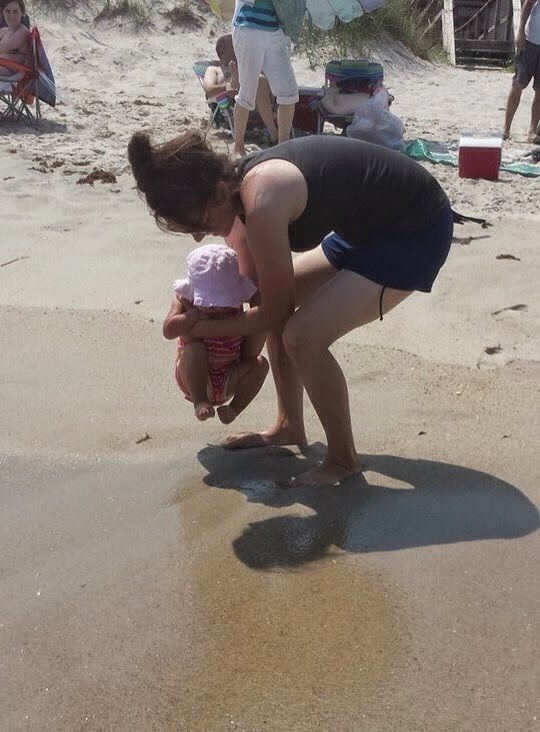 We took the babe to the beach for the first time and she absolutely HATED it. ha. She was flat out determined not to touch the sand, no matter how far I lowered her. When she couldn't scrunch up her legs any farther, she started climbing up my back. ha. My husband and I always debate whether we should go to Disneyland or the beach for vacation. (beach = him, Disney = me) Looks like it's two against one in favor for Disneyland :)

Anyway, when I got back to Utah I found that my hold at the library for "City of Heavenly Fire" by Cassandra Clare was finally in. I put a hold on it the day after it came out and was already number 40 on the list. (that was back in March). A.R Braithwaite and I just discovered the series this February and loved it. Since I'm planning on buying them for my personal library, I would have just bought them, but I wanted to wait and buy the box set... but they only sell books 1-5 in a set, which I think is super annoying and really weird. I thought it was awesome enough to make the four months of waiting worth it. Since I waited so long, I took my time and made the book last four days. haha.

(I also find myself uncharacteristically fan-girling Jamie Campbell Bower because he played Jace for the Mortal Instuments: City of Bones movie. haha. I always thought he was ugly and weird (harsh?) but then he played Jace and I am smitten. I love him and think he's beautiful now. haha.)

Anyway, it looks like Clare is setting up for another set of Shadowhunter books and I'm not sure how I feel about it. I loved the Mortal Instruments series, and just kind of want her to call it good. You know? Clary and Jace are by far my favorite YA couple ever... which brings me to my next literary discovery.

I took the redeye flight home from NC, and had the babe on my lap since the plane was packed full. She was exhausted and so she was out pretty fast... but that girl is 33 inches long and 20 pounds (yeah, she's small for her age, but big for my lap if she wants to use it as a bed) Anyway, I had to have both arms holding her while she slept or twisted around to get comfortable for four hours. FOUR HOURS. This made it impossible for me to sleep (I was afraid I'd drop her or something) and impossible for me to do anything to occupy my time. I somehow managed to wiggle my iPod out of the diaper bag and went scrolling through my audiobooks. (music annoys me when I'm tired) Unfortunately I only had the Twilight series and "The Fountainhead" loaded.

I was never a Twilight fan. I enjoyed the first book, but the second and third annoyed me so badly that I skipped them altogether after the first few two chapters. I picked the series back up for the last book and then never looked back. I got all the audiobooks for free though, and I've listened to the first book a few times when I wanted something mindless in the background while cleaning.

Anyway, Ayn Rand felt a little too much for my exhausted state, and so I decided to listen to "Eclipse" since I hadn't read it before. I actually got pretty into it and since I didn't finish it,  am still listening to it while I clean the house. (that is one thing I like about audiobooks, you can double task) From my limited reading of the series, I always preferred Edward to Jacob. But now that I've actually read Eclipse, I'm changing teams. Jacob isn't as annoying as I thought. haha. In fact, I prefer him 100%. I'm not sure if that has to do with me reading "Eclipse" after a couple years of marriage and my relationship ideals have changed, but I liked the less dramatic, steady, normal and laid-back life with Jacob. Bella totally should have gone that route.

And since this was once a huge disputed issue (they even had separate theaters for Team Edward and Team Jacob fans here in Utah when the movies were coming out) I thought we'd giveaway a Twilight book to commemorate my late arrival to this long-ended party. ha

(by the way, I discussed this with A.R. Braithwaite while we were at story time for the babes at the library and she said she's still Team Edward. A blog divided!)

Since my change of heart came with reading "Eclipse" we're giving away the "Eclipse" novella, 'The Short Second life of Bree Tanner." 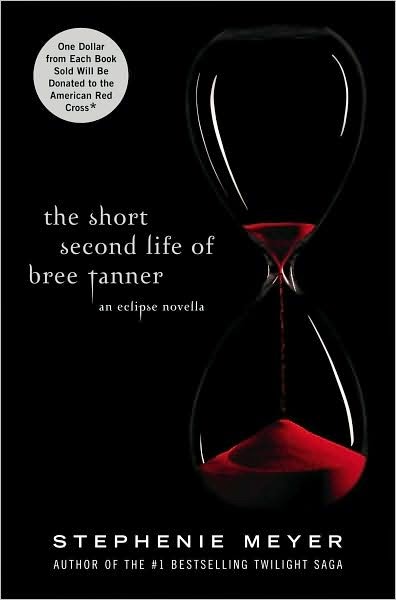 We'll give it away to the first person who tweets TEAM EDWARD or TEAM JACOB with the #fpdistillery hashtag and leaves a comment.
(you must leave a comment here letting us know.)

Coming up: Author Feature with author Mandy Voisin as she prepares for the release of her debut novel "Star of Deliverance"
Posted by Folded Pages Distillery at 3:05:00 PM