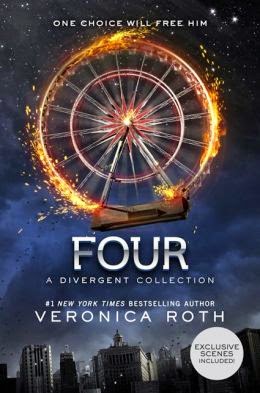 
*If you have not read the Divergent series, there may be spoilers in this review. Otherwise, anything I include here is common knowledge to those who have already read the series.

Because I had a serious love/hate relationship with the Divergent series I had no desire whatsoever to read Four.
I blew it off intentionally when it came out and didn't think about it again. (I won't get into all the reasons why I love/hated Divergent because it would take too long. ha)

Anyway,  this past week my sister called me up and asking if I'd read Divergent because she wanted to throw some ideas around with me. She was writing a paper for a class (they were required to pick a dystopian novel to write about) and wanted to talk about feminism themes in the book. After we spent a good hour or so talking about and hashing through the story, characters and themes, I went to the library to pick up a copy of Snow like Ashes. On my way out the door, I saw Four sitting on the Lucky Day shelf (popular books with long waiting lists are put on the Lucky Day shelf for a reader to check out for only a week.) It felt too much like fate, not to mention I had just spent an hour talking about how Four was one of the characters I liked in Divergent. So I grabbed it, turned around and went to check it out. ha.

This is a super quick read. I read it in just a few hours, and have to say that I actually enjoyed the whole thing. Four is separated essentially in two parts. Before and After Tris. We get to see what Four's life was like before he transferred to Dauntless. We get an intimate look at his home life and his thought process in choosing to leave Abnegation for Dauntless. This book felt like a natural and essential part of the Divergent series. My initial thoughts were that Veronica Roth was trying to milk her success with the series by offering this book. And maybe she was. Who knows, who cares.  After reading it, I feel like it is a great addition. We were able to take what we knew about Four from the Divergent series and add to it with this book. I liked understanding Tobias/Four on a deeper, personal level.

Four also gives us a clearer and better understanding about Four's relationship with Eric and just how long and deep the Erudite take over was being planned and implemented. We also get to read about when Four learned his mother wasn't dead and what his life was like as a conflicted Dauntless member who knew something was up with Erudite early on.

It was also nice to get Four's thoughts and side of things concerning his romantic relationship with Tris. Half the time I was reading the Divergent series I was mad that Four was in love with Tris. ha. I wanted him to have someone who treated him better. Anyone else with me? But after reading it from Four's point of view, I get it. We all have our reasons for falling in love with someone, even if no one else understands it. And maybe for that reason alone I am glad I read Four. It takes away some of that hate relationship I have with the Divergent series. ha.

Roth notes that she initially started writing Divergent from Four's perspective instead of Tris', but after 30 pages or so, she couldn't drive the story much. A couple years later she returned to the story following Tris and it worked. Reading Four makes it clear just how much depth and time Roth gave to Four that we weren't always able to see until now.

There are three scenes that Roth includes at the end that she said didn't quite fit into the story line the way she outlined it, but she felt were important to add. These were three key scenes in Four and Tris' first meetings. When he helped her off the net as first jumper, in the cafeteria soon after, and when Four sees Tris  when she gets her first makeover.

Locally we have a restaurant that makes pie and cake shakes. (they blend a whole slice of cake or pie into a milk shake. To. Die. For.) Anyway, Dauntless is all about the chocolate cake, right? So I thought a chocolate cake shake would be a perfect fit for this book.
Posted by Folded Pages Distillery at 3:32:00 PM