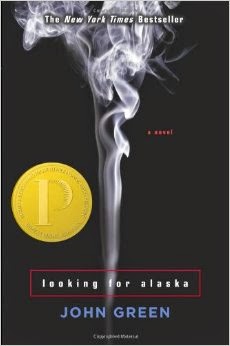 
Two things: Either my current exhausted state had a negative effect on my reading of this book OR I have grown much to old for a book like this. Maybe both?

In a nutshell I would describe this book as a novel devoted to teenagers living with varying degrees and types of life suffering. (family issues, money issues, popularity issues, etc. etc.) And they deal with their teenage suffering with cigarettes, alcohol, pranks, and the pursuit of sex.

While their scholastic intelligence is incredible, their general intelligence can be described as perfectly teenage.

This story can be placed in two categories. BEFORE and AFTER. The BEFORE focuses on Miles Halter, a boy with almost no friends and a somewhat morbid interest in learning what famous peoples last words are. Miles decides to leave public school for boarding school in search of his "great perhaps".

After transferring to  Culver Creek Boarding School, Miles earns the nickname "Pudge" from his new band of friends—Chip aka "The Colonel", Takumi, Lara, and Alaska.

I feel the the entire BEFORE part of this book is merely set up for the AFTER. We read about life at Culver Creek and a lot about these five friends, though most of the specifics are saved from Pudge, Colonel, and Alaska.

This is where it suddenly dawned on me that I might be too old for this book. Reading about the drama, the smoking, the drunkenness, the irrationality of teenagers... that got real old and really tiring fast. Maybe this is due to the fact that I can't relate. While I was a goof and a prankster in high school,  I was the definition of a goody-goody when it came to drugs and alcohol. I didn't care to even try any of that stuff. So reading about it for nearly half a novel was mostly annoying and I often put the book down to do other things.

There were times when Alaska and Pudge tried to get deep with their talk of the meaning of suffering, etc, but I just couldn't get into it enough to buy it.

Then we hit the AFTER part and things get a little more compelling. There is a sudden purpose to the story and it's all veiled in page-turning mystery. But even that started to lose steam after awhile.

The very last bit of this book was excellent and I thought it was filled with great life advice for teenagers and adults alike. An excellent, beautiful, powerful ending. I just felt like the entire book was a set up to to put the last two or three pages of words into brilliant context. (I read this on my Nook, so I'm not sure what the pages are really like in the actual book.) The way I imagine it is that Green had this brilliant epiphany and decided to write a whole book around it, and the only way to give it lasting power, he had to write two hundred pages of smoking, drunken, unhappy teens as preface.

This book is full of great quotes that make you realize that John Green is not only a great writer, but a great thinker. I just wasn't his audience for this one.

So. Generally, I wasn't that in to this book. But when I closed it, I found that it wasn't nearly as bad as I thought it was. I will probably never read it again, and probably won't be too quick to recommend it if someone asks, but not altogether a bad read after all.

Observation:
I didn't realize that this book was written back in 2005 when I started it. The YA genre is relatively new, and I think Looking for Alaska was written under an evolving or different set of rules. For example, they filter out the "F" word in YA and make sex pretty vague. Just for general "FYI", there was a lot of "F" word in this book. There was one brief sexual encounter that was both vague and clearly pictured. ha. I only include this because I thought it was interesting to see the evolution of the genre.