The Truth About Alice Review 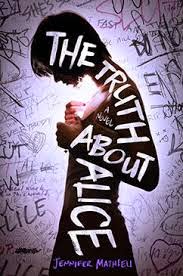 It's kind of amazing how this tiny little book (seriously, it's the skinniest book I've read in a while) packed such a serious punch.

Lately it seems like the books I have been reading have had unique and quirky writing styles, and when I started The Truth About Alice the first thing that struck me was how really plain the writing was. I took that as a negative right off the bat and it took me a chapter or two to really get into the book. However, once the story actually gets rolling, and the serious issue it takes on, that plain writing style makes it. Because it allowed me to think about the seriousness of the issue at the same time I was caught up in the story. I'm not saying you can't do that with other books, but Mathieu left a lot of room for thought with the straightforward writing and it was actually quite brilliant.

Let's start with Alice, cause she is a super, total, freak, slut, ho-bag. I mean, like the biggest slut ho-bag in the entire world.

Or at least that is what everyone else is saying, and the evidence *coughgossipcough* is really clear.

The Truth About Alice comes to us from four points of view: Elaine, Kelsie, Josh, and Kurt. Each a student at Healy High and each involved with the scandal that is Alice, which BLOWS up after the death of star quarterback Brandon Fitzsimmons.

Readers can almost be a student at Healy High, since the four voices that speak are speaking directly to us. Telling us the gossip or their facts and experiences just like they were whispering it into your ear.

They begin at the end. Alice is the biggest slut ever and she's a murderer too. OMG, Alice is the worst. And slowly, through each chapter and each voice, new facts come out that finally give us the full picture.

People, this is one of the most maddening, hateful, and heartbreaking reads you will ever read. I was quite literally angry while reading this. I was so full up with indignation that I had to set the book down for a minute to get a grip.

Because of the honest thoughts that come from each student, we get a clear idea of who they are and it's very efficient character building. We all knew someone like each of the characters in high school. Maybe that person was us. Either way, because of that, I think readers inadvertently "fill in the blanks" on each character and our personal experiences fill in any holes on the characters.

And even if we don't know Alice through her thoughts, and the thoughts of others is often skewed, I think Mathieu found a way to let readers know the real Alice. This book quickly became a page turner and I couldn't stop until I was finished.

The worst part is that what happened in the book actually happens. And actually happens the way it went down in the book. Rumors, bullying, blatant lying, or taking the truth and using it to ruin someone. And all the while, the one person we want to hear from—Alice— doesn't speak. Cause it doesn't matter what she says. She's just a lying ho-bag, right??

I think this book has an important message, and not only for kids in high school. For anyone. What you say and how you handle situations can really ruin a person or a community. I think it's worth reading, invokes self-evaluation, and definitely worth discussing with book clubs and with kids.