The Categorical Universe of Candice Phee 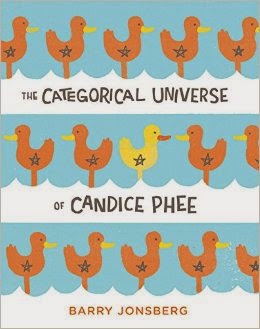 Apparently, Australians have a thing for writing about people with autism. I'm okay with this.
Everyone in this story has a different perspective from one another, not just the kid with autism. Her best friend, Douglas, believes he is from another dimension while his "facsimile" parents believe he is suffering from a personality change due to a traumatic head injury. Candice believes her goldfish believes that she, the daily food bearer, is God, while the goldfish is likely just happy to get some food without thinking too much beyond that. Candice's dad believes his brother stiffed him out of money during their partnership while his brother believes that her dad did nothing to contribute to the earnings. It is somewhat unclear what Candice's mum believes except that maybe she's too depressed to believe in much of anything. And Candice is out to save the world for everyone (or at least those she is close to; the rest will have to wait.)
From all those perspectives swimming around, you might think that this book was incredibly complex and sophisticated. It actually didn't come across that way to me. I feel like it ended abruptly without developing a lot of themes it started with, and without satisfactorily having Candice save the world, as she had set out to do. I enjoyed the book, but I was surprised that I didn't enjoy it more, what with the themes of multiple universes and friends who are oddballs, which tend to be favorites of mine. That is why I only gave it three stars. It's a fun read, just not amazing.
This book was originally published under the title, My Life as an Alphabet because the chapters were organized thematically in alphabetical order. When I first picked up this book, this format almost prevented me from buying it because it seemed so gimmicky. But the author uses the format smoothly enough, that after awhile, I pretty much forgot about it.


When reading this book, pair it with a pumpkin shake. Candice's mum has a tendency to call her, "Pumpkin." She does not understand why calling someone a gourd is a term of affection, but she puts up with it, for her mum's sake.
Posted by Folded Pages Distillery at 10:38:00 PM