This is the Story of a Happy Marriage 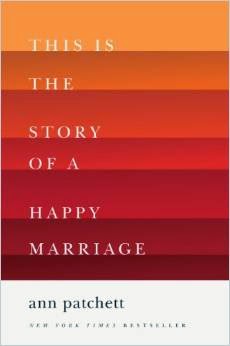 Ann Patchett admits in her collection of essays that writing non-fiction is what she does to pay for what she loves to do, writing fiction. And I could tell. I liked her essays; they were good. But not nearly as good as the fiction I've read of hers (State of Wonder).
Just to be forewarned, the title This is the Story of a Happy Marriage is misleading. That essay ends up with her in a happy marriage, but it is mostly about divorce and then how she was too shell-shocked from her divorce to commit to a marriage for eleven years.
Other than that, she was too honest. She didn't reveal any inappropriate details, even when she was writing about being protested against for writing pornography ("The Love Between the Two Women is Not Normal"). But reading about her divorce made me distinctly uncomfortable. Maybe it was just that I couldn't relate, but I felt like her divorce was none of my business ("The Sacrament of Divorce"). I couldn't understand why Atlantic Monthly or Harpers Magazine readers would want to know about her life. Maybe I just don't read enough magazines.
On the other hand, some of the essays I enjoyed the most had nothing to do with anything I've ever experienced. I fell in love with her when she described practicing jumping over the wall at the Cambridge Public Library in preparation for becoming a cop, but really for the sake of a story. Never more does she seem like the writer than when in her oral exam, she tells two cops, "I know who to face down and who to ignore. I consider telling them that I know whom to face down and whom to ignore, but even though it would be grammatically correct, I don't think it would further my case" ("The Wall").
And then there were the essays I could relate to like the one about her grandma slowly losing her abilities to old age ("Love Sustained"). Everyone has a grandma. It made me want to write about my grandma, see my grandma while I still could. And her essays on writing made me feel like maybe someday I can be a writer as long as I'm willing to face down my own inadequacies ("The Getaway Car").
I had to do a little bit of digging for the drink pairing. Ann Patchett owns a bookstore called Parnassus in Nashville which apparently doesn't have a cafe. But they have a working relationship with Bluebird Cafe, which recommends for a true Tennessee experience to try Jack Daniels Tennessee Honey.

Posted by Folded Pages Distillery at 8:55:00 AM

Email ThisBlogThis!Share to TwitterShare to Facebook
Labels: Ann Patchett, Doni Faber, Essays, This is the Story of a Happy Marriage