The Goddess of Small Victories Review 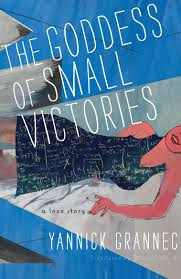 
The Goddess of Small Victories: A Love Story
by Yannick Grannec
translated by Willard Wood
Other Press
October 14, 2014
(458 pages)


If you want to read about Godel's ideas, this is not your book. If you want to read about Godel the man, this is not your book. It does touch on these matters. But the book is really a portrayal of his vibrant, loyal, sassy wife, Adele Godel. And it's so good! The story inverts the premise, "How could such a genius marry such a common woman?" to "How could such a difficult man be married to such a brave woman?"
The greatest part of this book is that it is a meta-rebuttal against the claim that Adele was inconsequential. The book focused on her in such a convincing way that Kurt comes across as a minor character even though he was the historical figure. And as a reader, I appreciated that decision. She is a dancing girl when Kurt first meets her and very removed from his intellectual circles. Nevertheless, she can hold her own. She is largely responsible for helping Kurt survive his breakdowns. She had loved Kurt, and in the end as Anna concluded, that's all that matters.
The chapters alternate between Adele's life with Kurt and Adele in a nursing home. Her later years are narrated through Anna, an archivist seeking Kurt's papers, visits her. You might suspect that the later chapters might be dull or simply reminiscences, but actually, they're lively adventures. Anna kidnaps Adele to go the see The Sound of Music and another octogenarian gives Anna a haircut. (Now I call that daring!)
The author makes Adele's and Kurt's relationship representative of the mathematical concept of inconsistency, where "one can prove a thing and it's opposite." Adele says, "That's nothing new, I specialize in it." Kurt jokes, "In you, Adele, it's contrariness." In a few places, Kurt and Adele are both inconsistent with things they have just said. I think it's an intentional reference to this theme The first time was when Kurt accused Adele of making an ad hominem argument. This is where you attack a person's character rather than refer to the content of their argument. But Kurt had just made a similar argument. Kurt is just as deeply flawed as Adele.
There were so many parts of this book that I loved. I underlined a lot. For example, when Kurt explains his incompleteness theorem he says, "Adele, my proof is irreproachable." She rebuts, "I'm sure that's true. I know the way you open a window three times to make sure it's closed." I love the acerbic familiarity this exchange captures.
One detail that makes it a little harder to read is that none of the dialogue was flagged with he said/he said. A few of the characters would refer to the other characters by name, but I sometimes lost track of who was saying what.
Adele would sometimes make Anna a pot of chamomile tea to calm her nerves when she would come to visit. So that is what I recommend to read with this book.