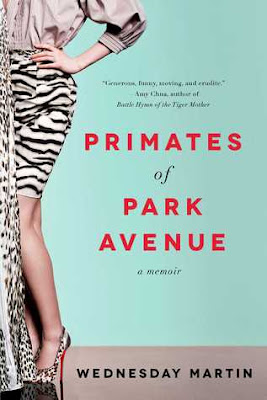 Like an urban Dian Fossey, Wednesday Martin decodes the primate social behaviors of Upper East Side mothers in a brilliantly original and witty memoir about her adventures assimilating into that most secretive and elite tribe. After marrying a man from the Upper East Side and moving to the neighborhood, Wednesday Martin struggled to fit in. Drawing on her background in anthropology and primatology, she tried looking at her new world through that lens, and suddenly things fell into place... And so she analyzed tribal migration patterns, display rituals, physical adornment, mutilation, mating practices, extra-pair copulation, and more... Every city has its Upper East Side, and in Wednesday's memoir, readers everywhere will recognize the strange cultural codes of powerful social hierarchies and the compelling desire to climb them. They will also see that Upper East Side mothers want the same things for their children that all mothers want: safety, happiness, and success; and not even sky-high penthouses and chauffeured SUVs can protect this ecologically released tribe from the universal experiences of anxiety and loss. When Wednesday's life turns upside down, she learns how deep the bonds of female friendship really are.*

I found this book to be very funny and entertaining, it was as though I was learning about some foreign culture - perhaps even aliens from a planet I can't imagine ever visiting. I liked learning more about the Upper East Side of Manhattan this way, I love philosophy and other educational literature, this book often reads like one of those texts, but most of the time it is written subjectively as a memoir. This push and pull of differing genres didn't always work for me. I love the field notes at the beginning of some chapters, but the subjective and personal perspective didn't make me feel like I was always getting the full and honest story. Martin talks several times about 'going native' and describes different issues Upper East Side mothers have with things like choosing and maintaining a nannies, but in that section she neglects to talk much about her personal experiences. Sometimes she refers to the Upper East Side mothers as though she isn't one of them, whereas other times she vividly describes herself being one of them and assimilating to the culture. I didn't always know where she stood and this confusion made me not like it as much as I otherwise would have.

At times I wanted more honesty and openness, whereas there was one time in particular that I felt Martin went a little too far with the openness. Towards the end Martin shares a very personal struggle she went through and this struggle leads to her conclusions about the Upper East Side mothers. However, after Martin describes her struggle and before she gets to her conclusions there are many stories of other women that I felt weren't necessary for the story's progression or to support her findings. Some of them made sense and were good, but others just felt like Martin was trying to make readers have an emotional reaction, which I did. The honesty and outpouring of personal stories made for  a mother's worst nightmare when it comes to paranoia, by the end of the section I believed that one or both of my children were doomed and that the personal struggles/devastations described happen to pretty much everyone everywhere. I know bad things happen to everyone, but this whole part of the book was quite depressing and felt at odds with the rest of the book.

One last point, Martin jumped around in time a bit, which was confusing. The first few chapters were chronological and felt as if she was trying to make this book into a memoir, but then she moved on to centering chapters around specific themes or findings instead of her experience in time. I think this last thing lead to confusing genres again and made me feel less connected to her story as a whole.

Overall I don't plan on reading this book again, but I enjoyed it and recommend it to people who would like to learn more about motherhood from different perspectives. For instance, learning about mother primates and how they work together/against each other in nature, as well as taking a closer look at the perspective of very very rich mothers who do things differently from the rest of the world. These things were profoundly interesting to me.


*Summary taken from Goodreads
Posted by Folded Pages Distillery at 9:20:00 AM