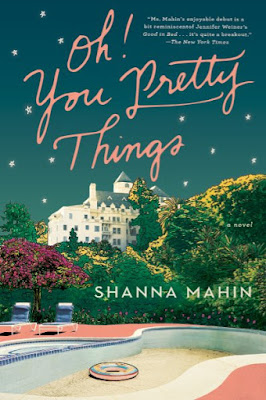 Jess is a 29 year old, divorced, 3rd generation Hollywood, celebrity-obsessed barista that is pretty much on the train to nowhere.

When she gets the opportunity to trade her barista job to be a personal assistant to famous film composer, she doesn’t waste any time making the switch. But the truth is, Jess’ talents are really in the kitchen (she’s a killer cook), not as an assistant to a neurotic music composer.

So when her cooking skills catch the attention of an even more famous celebrity, she’s totally willing to kiss the composer goodbye and head to greener pastures. But working for any celebrity isn’t easy, and on top of that Jess’ neglectful and absent mother shows up. And when her mother shows up, that means she’s out of money. Juggling celebrity drama and a wanna be celebrity mama might just be enough to make Jess lose it.

This book was like reading a celebrity gossip magazine while watching Rachael Ray’s cooking show. (ran this by Shanna Mahin and she said in her opinion it would be more like scrolling TMZ while watching Ina Garten. ha.)

As you may know by now, I’m a sucker for a foodie book, and the first half of this one had some good foodie moments for me.

The first half of this book was fun. I loved the way author Shanna Mahin crafted Jess’ character. Jess is just my type of funny— and between her comments and the celebrity situations happening, I was thoroughly enjoying myself. (I pretty much imagined her to be Rebel Wilson the entire time)

The second half of this book is where the drama really starts going down and it felt a little sidetracked and lost from where it was going.  One thing after another seems to blow up and I couldn’t help but feel sorry for Jess. There was a lot of time spent on Jess’ relationship with her boss and friends (all very well fleshed out characters) but there were some key characters that I felt got left out almost entirely. Her relationship with her mother seemed like a major plot point that kind of felt dismissed.

I loved the great writing and characters. I wish that this story would have branched its focus out a little more, but that doesn’t mean it wasn't exactly the light read I needed after coming off such an emotionally draining, dense read like The Nightingale.

This is a perfect, quick read for anyone who has a guilty pleasure for celebrities and celebrity drama, reality TV, and a good sense of humor.