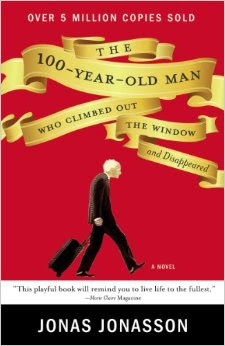 
The 100-Year-Old Man Who Climbed Out the Window and Disappeared
by Jonas Jonasson
Translated by Rod Bradbury
Hachette Books Paperback Edition
September 11, 2012
(400 pages)


You might think that a centenarian escaping from a nursing home might pick a few flowers, get his already-soiled slippers more dirty, talk to a few younger folk, and settle back down for a nap. But no, when you've lived a hundred years, you've had plenty of time to wreak havoc. And now, so close to the end, why not wreak some more? So when a member of the gang, "Never Again," asks Allan to watch his suitcase while he takes a leak, Allan doesn't even hesitate before running off with it.

This book is laugh-out-loud hilarious. It alternates between his current escapade, being chased by thugs and the police, to his colored past where he tells Robert Oppenheimer how to make the atomic bomb, accidentally tells the secret to Stalin, and rescues General Mao's wife, along with other adventures.

The story hangs together so well, I almost forgot how far-fetched everything was until Allan begins to explain what "really" happened to the prosecutor who has been chasing them for the murders of three men. The prosecutor takes him for a rambling, senile fool, when really the joke is on him This part alone bumped up the book from a four to a five for me.

I also loved how Allan makes friends with everybody along the way. It reminded me of The Black Cauldron or Howl's Moving Castle in that respect, though I'm probably the only one to make that association.

This book is a cure for a wasted life. If you feel like you're wasting your life, Allan reminds you there is no excuse for getting out and living it!

Email ThisBlogThis!Share to TwitterShare to Facebook
Labels: Contemporary, Doni Faber, Jonas Jonasson, The 100-Year-Old Man Who Climbed Out the Window and Disappeared