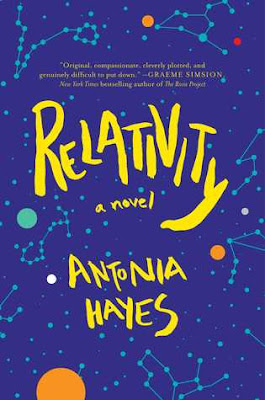 Ethan is an unusual boy. He loves astronomy and quantum physics. His mind seems incredibly adept at grasping these abstract concepts. It's almost as though he can see physical interactions that other people have to know only through indirect means.

But Ethan also has had a traumatic brain injury. Or at least that is what the doctor tells him when he has a seizure at the age of twelve. His father was found guilty of shaken baby syndrome. This is why he hasn't been in Ethan's life.

Ethan didn't know this. It's always been just him and his Mum. She used to dance ballet professionally before quitting to focus on taking care of her son. But now, Ethan wants his dad in his life and wants to prove that his dad wasn't guilty.

The intermeshing of relationships in this relationship is solid and convincing. I love fiction books about science. Hayes weaves these scientific ideas into compelling metaphors. In the first pages, Ethan's knowledge of astronomy feels a little forced, but this sense quickly vanished as I got to know the character better. The book deals with themes of love and trust, of what makes us special, and the inability to know truth for certain. The three characters are united in the overwhelming passion for their interests and for each other.

My favorite lines for the nuances they carried were: "Sometimes the finality of things struck him, like the sadness of mixing Weetabix and milk. They could never be unmixed."
Posted by Folded Pages Distillery at 1:20:00 PM