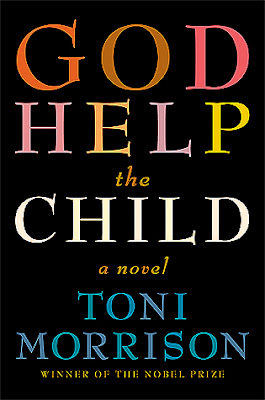 
"Spare and unsparing, a fierce and provocative novel that adds a new dimension to the matchless oeuvre of Toni Morrison."

I feel like this review, included on the dust jacket of the book is fairly weak and vague, at least in its claim that it "adds a new dimension" to Toni Morrison's prior work. Why is that, do you think?

Here's what I think: Toni Morrison's books are uncomfortable to read. Beautifully, evocatively written, but also "unsparing" in not letting the reader remain naive.

When I first read Beloved in high school, I thought I was more emotionally mature than other students in my class because I could handle the terrible things that were written on its pages. Now I think maybe I was just as sheltered as they were because I wasn't taking into consideration that these terrible things HAPPEN to people. Sure, it's fiction and the reader can find some comfort in that, but it is also realistic fiction (with a little magical realism mixed in) that is based on the experience of Black Americans.

When I first picked up this book, I didn't make it very far. I thought, "Not another book about racism. Can't Morrison do anything else?" How racist was that?! But now that I'm immersing myself in anti-racist study, I felt reading this book was an essential ingredient to better understanding of current race relations in the United States.

Bride's skin is so dark that when she is born, her mother almost decides to suffocate her. Though she is swift to change her mind, she raises Bride with little affection, leading her to choices just to get her mother's attention. Now Bride is a knock-out success adult, with a lead position in a cosmetic company she created, "You, Girl." But the man she loves just left her saying, "You not the woman I want." She let him leave. But she wants to know why. Meanwhile, she brings a present to a woman she testified against in a pedophile trial fifteen years back and has just gotten out of jail. It does not go well.

The pedophilia is what really gets me. Whenever I come across it in literature, I have a hard time sloshing through it. So it's hard to simply "like" God Help the Child because it is brutal.

On a lesser note, I did not like how heavy-handed Morrison's use of names was: Bride, for the gorgeous woman that all the men desire and then leave, Booker, for the man who loves to learn, but does little with his life, Sweetness, who asks Bride to call her out that so people don't question her status of mother in public. Now that I write this, I realize those usages weren't transparent, however, but challenged the stereotype they brought to mind.

It can be difficult to balance the need to protect yourself and the need to be aware of the cruelties of the world. If you are in a place where you are hurting, this book will probably be too emotionally difficult of a read for now. If you are in a place of strength, of wanting to understand and have compassion for others, then this book might help you along your journey.