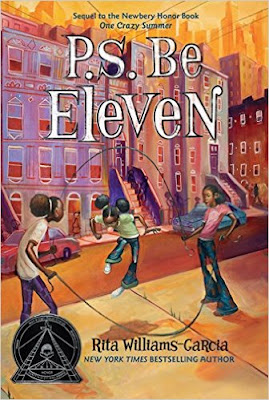 The day after the election, I asked a librarian what I could read to deal with the heartache. Together, we found P.S. Be Eleven, the sequel to One Crazy Summer.

Set in 1968, the story follows three Black sisters who have just returned to Brooklyn from a summer learning from the Black Panthers and their revolutionary-poet mother in Oakland. Now they have to juggle the "Power to the People" mentality they've learned with the propriety and decorum adults around them admonish, particularly their grandmother, "Big Ma."

Delphine, the protagonist, must deal with the complexities of sixth grade, her father marrying a woman different from her mother, and her uncle just back from Vietnam. All the while, her real mother admonishes her through letters, "You're eleven. Be eleven."

Although Williams-Garcia does a good job summarizing the prequel to this book, I still wished that I had read it closer to this one. They are both so vibrant that they deserve to be read together.

As with any book, the context in which it is read changes the reading of the book. The scene that grabbed me in the current context was when Delphine and her group debated on whether a woman could be president or not. The class voted, equally divided between boys and girls. And then a boy looked commandingly at his sweetheart and she changed her vote. So the boys won their position that women ought not run for president.

I would hope that in the last fifty years, things have changed. I would hope that a woman can run for president and have as likely a chance as a man. I would hope that the civil rights act was not simply a symbolic gesture, but a recognition that everyone ought to have an equal playing field. And that we would have moved forward from there.

History does not move in linear progression, but in fits and starts. This election cycle has been a fit. But it can be the start of something new, a recognition that we will all have to give a little in order for our world to heal.


Thank you, Mrs. Williams-Garcia for bringing around these sassy characters who know who they are even as they grow into new people to remind us to stand up for we believe in, even in the darkest days.