Harmonies of War by Ruby Fitzgerald 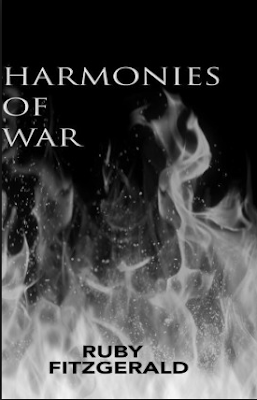 
I was really excited when Ruby reached out to me and asked if I'd be interested in reading her new book Harmonies of War (or HoW for short) The story follows the path of a number of characters as they pick sides, double deal and switch alliances during the war of all wars.

To make things even more interesting a handful of people are blessed (or cursed as some see it) with extra gifts.  Gifts that allow them to heal, shape shift, control the elements, see the future, or even manipulate the minds of others.  These magic wilding people are called Descendants, and they are met with extreme prejudice by ordinary people who fear the power they wield.

However the people are forced to come to terms with the Descendants living in secret among them, as a war lord wielding magic of his own starts tearing across the country leveling everything in his path for conquest.  Who do the people turn to and who will save them when only wicked wield magic.

All in all I liked this book.  There were multiple perspectives and as expected I found myself drawn to some more than others (like the bad a** warrior woman Silvia, and the sly dark prince Donovan.)  I also really like having alliances shift as people gleaned new information and there were a handful of characters that I never felt like I knew who's side they were on... I guess they were mostly on their own side and looking out for themselves, which felt authentic to me.

There were also a couple of characters I wanted to punch... Mostly the queen for being so hot and cold and such a sniveling mess when I felt like all she needed to do was stand up strait and start ordering people around for all of her hopes and dreams to come true.

However the banter and dark teasing of Donovan kept things fun, and Silvia kept things moving.

Final takeaways:  I think there were a few too many perspectives for me to latch deeply onto a certain character, but I loved that there were so many strong females and the queendom perspective  felt fresh to me.  I also liked seeing war from a more female perspective.  The magic wielders, being both needed and feared gave the book a bit of a Shadow and Bones feel, and I really appreciated how the whole story tied up at the end.  There is certainly room for a sequel, but I also feel comfortable with how the story ended (in my mind there are not enough standalones in the world.)  If you're looking for an interesting read with constant intrigue and jostling for power this might be a good choice for you.