Gertie Milk and the Keeper of Lost Things Blog Tour 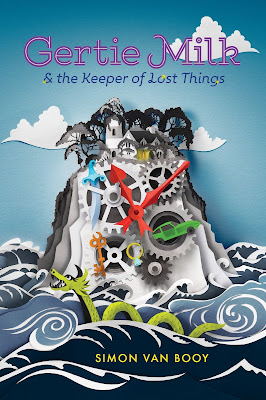 With the mystery of The Giver and the time-travelling duo brash of Doctor Who, Gertie Milk and the Keeper of Lost Things is a sure winner! Along with being a rollicking adventure, this book reminds us of the magic of living, brief though it might be.

Gertie finds herself washed ashore on an unusual island. She has no memory of who she is and the only clues as to her identity are her name sewn into her gown and a key etched with the letters KOLT. She escapes a giant worm and encounters a Keeper who trains her how to return crucial lost items to humanity at just the moment they need them.  She does this with the help of the book of all knowledge, a time machine disguised as a Jaguar, and a Robot Rabbit Boy. Her missions include returning a stick to Eratosthenes to help prove the circumference of the world, restoring a lucky watch to Mercedes Gleitze, who will attempt to swim across the channel between France and England, and reuniting a legendary sword with its rightful owner in Ancient China.

I loved how the historical moments were pivotal to humanity and yet not moments I was familiar with. With the entire span of humanity, both past and present, as their playground, Gertie's and Kolt's world is rife for adventure.

There are also plenty of philosophical moments I enjoyed, perhaps bleeding through from the author's experience of writing philosophy anthologies. What makes us who we are? Is it our memories or our decisions? What informs our decisions if we have no memories? What makes a moment stand out from all the others? Does someone have to notice it for it to be important? Or does it gain importance, not for its own sake, but for what follows it? Is knowledge inherently progressive or can it be wielded for good or evil?

Gertie must wrestle with her identity to defeat those who wish knowledge would be lost. The ending hints of further adventures awaiting Gertie and her friends. I anticipate these adventures will be just as attention-worthy as the first. 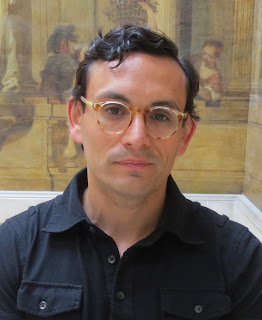 Simon Van Booy is the best-selling author of seven books of fiction, and three anthologies of philosophy. He has written for the New York Times, the Financial Times, NPR, and the BBC. He enjoys building robots, model airplanes, and off-road vehicles—which he likes to crash. He has an impressive umbrella collection, a Bowler hat, and carries a green thermos of tea everywhere. His books have been translated into many languages. In 2013, he founded Writers for Children, a project which helps young people build confidence in their literary abilities through annual awards. Raised in rural Wales and England, Simon currently lives between Brooklyn and Miami with his wife, daughter, Robot Rabbit Boy, and a fully-grown sheep.

When asked, "How did you choose the historical figures for the book?" Simon responded:

I decided to write about the people that interested me the most.  The historical figures in ‘Gertie Milk’ didn’t need much technology to do really important things.  Eratosthenes had a piece of string and a stick, from which he was able to measure how big around the earth is.
Champion swimmer Mercedes Gleitze needed only her courage and determination.  Ms. Gleitze is a very important person indeed.  She lived in a time when girls were supposed to be feminine, which is fine if that’s what a girl wants—but by swimming across the sea from France to England, she proved that girls can be just as tough and brave as men—if not tougher and braver! 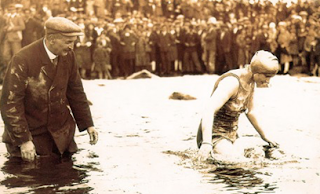 The Chinese sword-makers (Mo and Gan) are characters of a legend, which can probably be traced back to some historical story.  I like how they worked as a team to make articles of great beauty.  The evil king is also a character of legend, but for thousands of years, humans only respected leaders like him who were aggressive.  I suppose it made them feel protected from attack by other tribes.  Nowadays we want our leaders to be intelligent peacemakers, who have studied the mistakes of past leaders and always put others first. Weapons have become too deadly for people who use war as a way to show their power. But this was how our ancestors lived. The Chinese philosopher Lao Tzu was a real person. He taught people how to live in harmony with the universe. Millions of people still follow his teachings today. He lived thousands of years ago and wrote on strips of bamboo.

*Advanced copy given in exchange for honest review