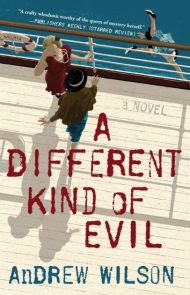 Agatha Christie—the Queen of Crime—travels to the breathtaking Canary Islands to investigate the mysterious death of a British agent in this riveting sequel to the “twisty thriller” (Publishers Weekly) A Talent for Murder.

Two months after the events of A Talent for Murder, during which Agatha Christie “disappeared,” the famed mystery writer’s remarkable talent for detection has captured the attention of British Special Agent Davison.

Now, at his behest, she is traveling to the beautiful Canary Islands to investigate the strange and gruesome death of Douglas Greene, an agent of the British Secret Intelligence Service. As she embarks on a glamorous cruise ship to her destination, she suddenly hears a scream. Rushing over to the stern of the liner, she witnesses a woman fling herself over the side of the ship to her death.

After this shocking experience, she makes it to the Grand Hotel in a lush valley on the islands. There, she meets a diverse and fascinating cast of characters, including two men who are suspected to be involved in the murder of Douglas Greene: an occultist similar to Aleister Crowley; and the secretary to a prominent scholar, who may also be a Communist spy. But Agatha soon realizes that nothing is what it seems here and she is surprised to learn that the apparent suicide of the young woman on the ocean liner is related to the murder of Douglas Greene. Now she has to unmask a different kind of evil in this sinister and thrilling mystery. 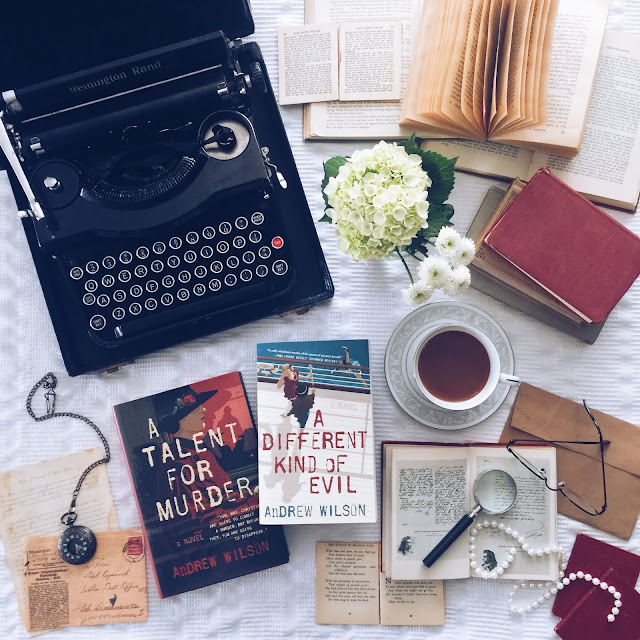 I am thrilled to be participating on the blog tour today for A DIFFERENT KIND OF EVIL! Before picking up book one (A TALENT FOR MURDER) I had no idea that in 1926 the queen of crime, Agatha Christie, disappeared for eleven days and then returned without ever revealing what happened to her. It went as far as authors Sir Arthur Conan Doyle and Dorothy L Sayers attempting to figure out what happened. (apparently Doyle took one of Christie's gloves to a medium to see if she could locate her.)

Anyway, author Andrew Wilson took this real life mystery and turned it into these books.  I am looking forward to continuing this series and love that they brought me to the story of Christie's disappearance!

Praise for A Talent for Murder

“In a stranger-than-fiction spin, crime novelist Agatha Christie went missing for 11 days in 1926. Author Andrew Wilson uses that real-life mystery as a starting point for a whodunit as gripping as Christie's own beloved writing.”
—Coastal Living, 50 Best Books for the Beach This Summer

“[A Talent for Murder] offers up a theory—and a good story.”
—Houston Chronicle

“A Talent for Murder reads like an amalgamation of a clever Agatha Christie puzzler with the darker characters and psychological insights found in Patricia Highsmith's thrillers... With strong characters, shrewd plotting and a skillful blending of fact and fiction, A Talent for Murder is a compelling period mystery that will keep whodunit fans captivated… Andrew Wilson’s debut mystery features Agatha Christie in a tantalizing and captivating cat-and-mouse puzzler with a creepy undercurrent of Patricia Highsmith's darkness.”
—Shelf Awareness

“Real facts and events are included in this compelling and thought-provoking mystery. It is well-written and researched, and compulsively readable.”
—RT Book Reviews

“It’s the classic starting point for an Agatha Christie novel with, of course, the extra dimension that she is going to be the murderer. How she outwits Kurs is but one part of Wilson’s very clever puzzle.”
—Open Letters Monthly

“Wilson’s ‘what if’ story is equal parts psychological thriller, detective fiction, and mystery. Readers will become emotionally involved with the protagonist, whom Wilson portrays as both sympathetic and quick-witted, even at her lowest points. VERDICT Those who enjoy fiction and detective fiction, including Dame Agatha’s own writings, will delight in this singular take on a strange event in Christie’s life.”
—Library Journal

“A most ingenious homage, solidly researched… Christie would have applauded its intricacy.”
—Andrew Taylor, author of The Ashes of London

Andrew Wilson is the highly-acclaimed author of biographies of Patricia Highsmith, Sylvia Plath, Alexander McQueen, the novel A Talent for Murder, as well as Shadow of the Titanic: The Extraordinary Stories of Those Who Survived. His first novel, The Lying Tongue, was published by Atria in 2007. His journalism has appeared in The Guardian, The Daily Telegraph, The Observer, The Sunday Times, The Daily Mail and The Washington Post.