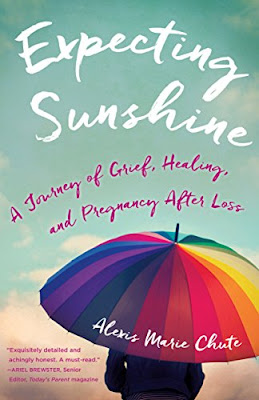 Expecting Sunshine: A Journey of Grief, Healing, and Pregnancy After Loss


"The weight of loss reminds us of the gravity of love."
-- Fred Rogers

Alexis Marie Chute takes us on a vivid journey of grieving for her son lost at birth. Through the gestation of her son, Eden, she processes the death of her son, Zachary. It is a story of grief and loss, questioning of faith, and the unforgiving limits of mortality. But it is also the story of healing through creative expression, of a woman balancing her own needs with those of their family, and of renewal through life. Her account is courageous in its vulnerability and the writing is absorbing in its detail.

I met Alexis at a conference we both attended recently. I can't help but compare the experiences as I read the book. Alexis is a go-getter, someone who can make anything happen. She is also compassionate, reaching out to all those around and helping put them at ease.

Alexis, in the book, is overwhelmed with grief, but also anger, especially to those she is closest to. It can be hard to reconcile the two experiences, but the negative emotions lend a raw edge of authenticity to her memoir.

She is, by all accounts, someone who is fascinating in her complexity, but never acts like she is better than others. This equability translates to her project: I lost a child a month into my pregnancy. I said it must have been so much harder for her to have held her baby in her arms. She didn't make that assumption. In her estimation, grief is incomparable.

I was surprised I didn't get more emotionally involved in reading the memoir. Maybe this is actually a strength: that those for whom this topic hits close to home won't be too overwhelmed by reading it.

Though the book definitely remains contained in her own experience, I can feel her compassion for others reaching our through the pages as inspiration for the project. She also created a film which includes interviews of others who have gone through similar experiences that expands on the memoir.

I found the following passage inspirational:

"Inwardly, I defended my unrelenting love for my girl to the irrational grieving woman who lived in my shadows. In bed in my parents' home, I imagined dissecting my inner self into many smaller selves. One part Mother. The second part Artist. Another part Mourner. I thought about dividing my identity again and again into disparate pieces too small to contain fear or worry, until I eventually fell asleep."

I could relate to all these parts. It also served as a reminder to never let anyone parse my identity for me. Alexis taught me that I lived in fear more than I had realized and inspired me to be more. 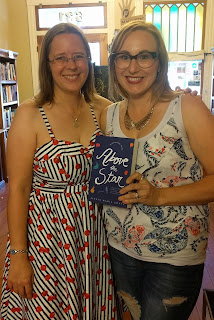 (photo taken at a signing for Alexis' most recent book, Above the Star)

DF: When did you write your book in relation to what happened?

AMC: Zach passed away In October of 2010, so basically I had what I call my year of distraction afterwards. I started writing partway through my pregnancy with Eden, so 2011.

DF: You said in your book that the details kind of wilted away into impressions and emotions. How did you call them back and take the reader on such a vivid journey?

AMC: I was an active journal writer, so I have really, really detailed notes of all my doctor's appointments and during the six weeks before Zach passed away, so I had a lot of material to go on. I re-read six different journals when I was writing Expecting Sunshine. When I was looking through those, it pulled me back into those times. I remember where I was. Because I'm a visual artist as well, I always take pictures. I remember one ultrasound, there was a rainbow on the ceiling, and that's one of the things I took a picture of, so I looked back at pictures on my phone. Often, and this is probably true of humans in general, I have a very strong memory for our happiest and saddest moments, so for me it was painful, but they were accessible memories. They were at the forefront in my mind.

DF: You said you're also a visual artist. Which medium is more comfortable for you?

AMC: I really feel that there are different parts of my personality that come out with different creative outputs. I do fine art photography, abstract painting, mixed media. Painting is very personal and I'm often alone when I do it, so it can express those intimacies differently. When I'm doing fine art photography, typically that is of people, and I see photography as a way to tell their stories, so it's more collaborative and social. So sometimes I like to be collaborative and social and other times I like to get lost in the quiet and alone. After my loss, I did quite a bit of art alone. I also found it immensely helpful and healing to do the fine art portraits of other people, because I've discovered that sharing stories is healing. Even though people might not have been through the same kind of experience, often their feelings are the same. People on different stages of the journey have learned different lessons, so we can support each other, which is beautiful. I think it's a gift that being a creative person has allowed me to experience.

DF: Was writing the book cathartic for you?

AMC: People ask me this quite a bit, and I would say more so putting it out there has been more cathartic, it's kind of helped me to let go of it, but I feel like at the time writing it was quite hard because I was being vulnerable. I don't always show my best colors in the book. I really wanted to be honest about the experience, and there were times when I was too judgmental against my husband or sometimes there were things I wasn't proud of as a mother, but I was trying to put that out there. I don't know that the writing itself was cathartic, it was kind of routine. The routine helped me cope through that pregnancy. I would say putting it out there and seeing other people encouraged, that's what was more healing for me.

DF: So it wasn't painful to have to keep reprocessing it?

AMC: It was definitely painful to edit it again and again and again. I edited it for four and a half years after I wrote it, from cover to cover eight times. It was definitely difficult rehashing it again and again, because it kept putting me back into that place. But at the same time, there is a beauty of understanding that can come out of hindsight and so a little distance from that experience helped me to edit the book in such a way to bring the art into it that I wanted to and make it less judgmental and blindly emotional.

DF: What was your husband's reaction to the book?

AMC: Well, he didn't read it for quite a long time. And I told him, "You need to read this. I'm going to be publishing this book." And so I think in the book, I showed my flaws and hopefully my redeeming characteristics as well. I think that's what Aaron saw. We both made mistakes in trying to figure out grief because we had never really experienced it on that scale. We both did the best we could with what we had in those moments. We learned a lot. In some places, it was probably hard to read for him. In a way, the book and our journey are so connected. I hope that it was a special book for him as well because it records a special season of our family.

DF: A lot of negative emotion comes up through the loss and is expressed in the book towards people and their insensitivities. I'm wondering how or if that has changed for you. You say it's been cathartic to put it out there, so have people been helpful?

AMC: In my faith journey, we basically left formal religion. I would say that we're still spiritual people, but leaving the strict, religious school of thought has number one, helped me be more graceful with myself because I used to judge myself a lot, but also it's helped me to be less judgmental of other people. I feel like through this experience of really questioning what I believe, those are the two things: grace and kindness, I've learned abundantly, to be graceful and kind with everybody. I think often people say the wrong things when they don't know what to say, but I think the intent behind it is good. So I try to give people the benefit of the doubt, more often than not. At the same time, in my religious experience, you had to be selfless. Put yourself at the lowest and put everybody else above you. Outside of that context, I've really learned about self care and self protection. I think I'm better at protecting myself against people who might not be the most welcoming and also. I visualize comments and things that used to hurt me as a castle. There's the inner fortress which is where I envision my heart being, and I picture a tall, stronghold wall around, with a drawbridge and I choose now who I let in. I really like that visual and then I say to myself almost like a mantra, I need to guard and protect my heart.

I find that I'm not always good at this, but I'm better at insulating myself and looking at self care as something that is really important, not being selfish, because I can't take of anybody else if I don't care of myself. Then it's ok to do what makes me happy instead of just giving out to other people all the time. That's one of the lessons I've learned. Everybody sees the world so differently. Even in the grievement community, I've interacted with so many people and they can have a similar kind of loss, even, and react to it completely different. I just try to let everybody do what's authentic for them and sometimes that means I need to do what's authentic for me, even if that makes other people unhappy. I've become very good at protecting my heart.

DF: How do you balance your responsibilities as a mother and the demands of being an artist?

AMC: That's a great question. I think that, have figured out a way that I'm flexible to do my creative work and also to be with my kids. So, number one, my mother and my husband are very supportive and they often, if I'm away, they will step in and take care of the kids. They just step up. They see how creativity is helpful for me, in my life, my mental health and so they make that a priority as well, which I'm immensely grateful for. And then we've also got some childcare, Brooke. She's both my kid's nanny and also my assistant. We're all in the house together during the day. Sometimes Brooke is working and I'm with the kids. Sometimes I'm working and Brooke is with the kids, so we just kind of switch off. Not in a formal way, but it allows me to stay at home with them and pick them up from school if I can, and have lunch and breakfast with them. Just try to get the best of both worlds. And then if I need to get something done, I'm like, "Okay, Brooke, you're on kid duty." She'll stop what she's doing and take over there. Not everybody can afford that and it definitely makes it tighter for us budget-wise. But it gives me the ability to balance when I can.