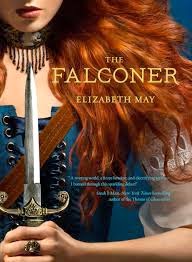 *This is a bit spoilerish because of some of my frustrations*

I had a serious love hate relationship with The Falconer.  Aileana Kameron lives in Edinburgh, Scotland in the 1800s. It's a time of strict propriety, where women are groomed to marry, keep a household and bear children. They should be learned, but not TOO learned. They should only speak when absolutely necessary. And they should not be going around killing faeries.

Yes, Lady Aileana, the girl with the huge dowry, high position in society, not to mention beauty, is anything but genteel. After she witnessed her mother's brutal murder—her heart ripped out by a faery—all the "lady" in Aileana disappeared. In an instant, her dreams of an extravagant wedding and cares for society vanished, replaced by the desire for vengeance, blood, and murder.

Baptized in the blood of her mother, Aileana, wants nothing but to kill faeries. It is through her blood lust that she meets Kiaran MacKay. Not only does he train her in the art of killing fae, he is a faery himself. Turned against his own kind for reasons we unfortunately never find out. (sigh)

So. Let's get down to it shall we?

What I loved most about Aileana is that she's tough. Some times she the annoying kind of "tough girl" who get defensive and touchy if you doubt her abilities. Other times she just plain hardcore as she jumps out of her orinopter (the one she built herself) mid-flight and falls through the sky so she can slaughter flying fae with her crossbow. She's also an inventor and creates weapons that better help her slaughter her enemies. Despite being tough, I loved that she allowed herself to still be emotionally vulnerable at all the times that I hoped she would be.

Then there is Kiaran. Who is also hardcore. And of course, devastatingly handsome. And those two are always punching each other, knocking each other down, fighting with swords... It's kind of awesome. I love that he isn't lenient with her training, and I love that she rises to the challenge.

As the book goes on, we discover that Aileana and Kiaran have this backseat romance going on. That's another thing I like. The romance doesn't define their relationship. It shows up in really intimate moments, (like when Kiaran is mending Aileana's battle wounds. haha) which I think the author does really well. Like, I felt the butterflies when I read about those occasions.

This book is definitely action packed. Aileana and Kiaran are always killing some kind of faery.

But really, the best character in this book is Derrick the pixie. He's a side character that appears for the purpose of comic relief, and it's always funny. Every time Derrick spoke I smiled or laughed.

Here are the low points for me:

This book is called THE FALCONER. We understand that Aileana is a Falconer. We almost never understand what the heck a Falconer is. Special powers? Inhuman speed to kill faeries? She feels the power of her kills go through her? Some how she is the only one who can reinstate a seal that is keeping hundreds of evil faeries in prison? We never really understand what a Falconer can do. And most of the things we learn come near the end of the book. I felt confused half the time. Especially when Aileana, who doesn't fully understand what she might be capable of, starts using these alleged dormant powers like she knows how all the sudden? I like when authors feed us a bit of information throughout the book so that when the big reveal happens, we get that little exhilaration of all the pieces coming together. I think the author may have been trying to do something like this, but we never got the big reveal and were left with a few bits of information that left me confused.

Also, let's just mention that when Aileana talks about how drunk off exhilaration she gets when she's killing things... it get's a little psychotic. Killing is like a drug to her. She gets anxious, antsy, sad, guilty over the memory of her mother's death, and then she kills something and she feels like she can breathe again. All she wants to do is kill stuff. It's kind of creepy.

But my biggest beef with this story is that we read all these 378 pages because we want to find out if Aileana ever gets to avenge her mother's death and if she and Kiaran are successful in reinstating the seal so hundreds of evil faeries can't spill out into the cities and kill every human being in their sight. And guess what? We never find out!

The book ends right in the most crucial moment of the battle. Right in the midst of the climax of the whole story, it's just over. No closure, no completion, no reader's reward.

At least Aileana and Kiaran finally get around to kissing. And while I wanted it to happen sooner than it did, I was also satisfied when and how it happened too.

This is set to be a trilogy, so hopefully the following books come out quickly. Cause I need answers!

I recommend drinking this with chamomile tea. First, because everyone but Kiaran is gulping down gallons of tea in this book. Second, because chamomile is calming and will help soothe your readers rage at the abrupt, answerless ending.

Email ThisBlogThis!Share to TwitterShare to Facebook
Labels: Elizabeth May, Hikari Loftus, The Falconer