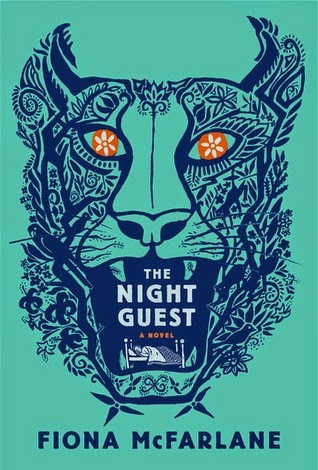 I'll tell you one thing, this book made me livid! Not only livid, but extremely sad. If I were to point out only one thing that McFarlane does well in this book, it would be how her novel is capable of producing real emotion. The kind of emotion that stays with you for awhile and prompts you to make changes in your own life.

Maybe it's because of her subject.

Eighty year old Ruth lives alone in a house by the sea. It has not been very long since her husband quite literally dropped dead from a pulmonary embolism. Her two sons do not live close (one all the way in Hong Kong!) and though they check in on her with phone calls and visits at Christmas, they have no possible way of knowing how their mother is really doing.

Then the tiger comes.

He comes in the night, prowling around the lounge room. Ruth can sense him, hear him sniffing around, pacing...but she is too afraid to go see for herself. She can feel the dense heat of the jungle occupying her home, smell the animal smell, but never sees the tiger himself. So the tiger becomes a mystery. Disappearing by day, and reappearing every now and again in the evening.

Then Frida arrives. A giant of a woman, sent by the government to be her carer. Initially, Frida only spends a few hours each morning in Ruth's home. But slowly, as the weeks pass, she remains longer and longer, until she finally moves in. All the while, we get the impression that Ruth's memory/sanity is deteriorating. Though it's hard to be sure at first if it is actually happening, or if Frida is only saying it is happening.

Between the day to day with Frida and Ruth, McFarlane takes us through Ruth's childhood and life memories. I enjoyed the flashbacks very much. It is the flashbacks that help develop Ruth's character so well. I felt like the character development was excellent all around.

There is SO much I'd love to discuss about this book, but saying too much more would threaten to ruin the story. I'll just say that McFarlane really did her set up well. When everything came together (or fell apart??) at the end of the novel, all the information fell together with perfect clarity. Things that you had begun to suspect during the journey finally become clear. (and you will be LIVID and sad and moved to change.)

Since I have never been eighty, and have never been particularly close with anyone of that age, I can't say that McFarlane's account from an eighty year old woman's point of view is accurate. But it feels right or realistic. I feel like she captured something really authentic in her writing of Ruth and Ruth's thoughts and decisions.

The only thing that really confused me was the tiger. He makes an appearance in the beginning of the book, and then doesn't come back into the story until about half way. THEN you just can't be sure if he's real or not. It doesn't quite make sense. I mean, there are a couple times when Frida confronts and fights the tiger. But it still doesn't really make sense. It feels so out of place and random. In conclusion, I think the tiger is Ruth's own senses, or mental warning. I think...

Really, if you read this book, email me so we can swap ideas on the tiger and how everything goes down.

I chose Kava for the drink with this book. Ruth grew up in Fiji. Her father a doctor, her mother a nurse, were missionaries in Fiji, working in a clinic. Fiji comes up constantly in The Night Guest so I looked up drinks that were particularly Fijian. Turns out Kava is their national drink, and though it's not particularly delicious, it's tradition and important for visitors to try it at least once. Kava sounds like it's not pleasant, so I think one gulp would prove symbolic and appropriate for The Night Guest.