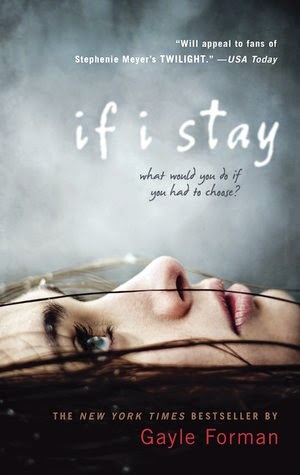 Seventeen year old Mia is a talented musician, possibly on her way to Julliard, she has two awesome punk-rock parents, a quirky little brother, an amazing boyfriend she is in love with, and her whole life ahead of her. That is, until one snowy morning that changes everything. Mia and her family are in a car accident and somehow she has found herself looking down at her own body, separated from her life. Soon she will find that she has more control over what happens to her than she thought and she is faced with the most difficult decision any person could ever make: whether she should stay and live or move on and die. Mia learns how hard it really is to live.

There are many things I enjoyed about this book, but there were also some technical issues. A lot of the story was told using flash backs, which generally flowed together well with the present tense plot line and made sense in that context. However, there were some time jumps that just felt disjointed and became distractions from that main plot line... in fact there were a couple of times when I felt like the present tense story wasn't really going anywhere, because we were stuck in the past so much. I did enjoy the characters and loved all of them, so much so that I know I will read the follow up book simply because I want to know what else happens to them. The flash backs contained many stories which I otherwise wouldn't have reason to have known about the characters and did make me love the characters more, but I also think some of the flash backs felt a bit forced and were simply extra things that weren't really necessary. I thought the descriptions of connections to music, and people through music, were well done and felt authentic. I found myself reflecting on times when music really made a difference in my life. The relationship between Mia and her rock star boyfriend (Adam) was written really well too, although there were some melodramatic moments where I found myself sighing heavily. It needs to be said that Forman does make sure to show every side to love, not just what we usually see in YA romance. She shows the reader how Mia and Adam worked hard on their relationship, it wasn't a soul mate connection bound by the Gods or hyped up on teenage hormones, it happened because they both wanted it to and were willing to try to make the relationship work - no matter what. So I definitely want to give Forman extra points for that unique honesty in her writing. Overall I was happy I read it and recommend it to anyone who enjoyed the novel The Fault in Our Stars, the film August Rush, or any other bitter sweet story wrapped up with love and loss.

I chose Oregon Berry Frosty as the drink to enjoy with this book because it takes place in the beautiful lush countryside of Oregon, where tasty berries run wild and plenty, plus the frosty part will make you feel like it's a chilly morning with scattered snow where you are too. I think this treat will bring comfort to you as you read, highlighting the sweet parts and making the sad parts more bearable.
Posted by Folded Pages Distillery at 9:26:00 PM

Email ThisBlogThis!Share to TwitterShare to Facebook
Labels: A.R. Braithwaite, Gayle Forman, If I Stay, Romance, YA