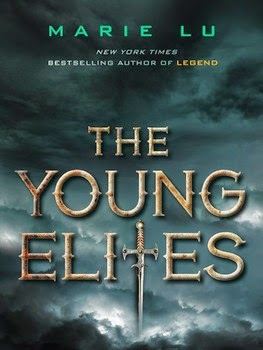 
This is my first Marie Lu book, and it definitely impressed me enough to make room on my long list of books for her Legend series.


Adelina Amouteru is a 16 year old malfetto, someone marked and disfigured by the blood fever that ravaged Sunlands for nearly a decade. The adults who contracted the fever died. The children came out of the fever with strange markings (unnaturally colored hair and eyes, strange markings on their skin, etc). And some emerged with powers; whether from the gods or demons, it is not clear. Those with powers were called the Young Elites. Those malfettos without powers were considered unlucky, dirty, and lower-class.

Adelina recovered from the blood fever, but it took one of her eyes and left her duly marked with silver hair. But no powers emerged in her, so she became nothing but a useless disgrace to her already abusive father. Despite her markings, Adelina is still beautiful, and one night she overhears her father sell her off to a merchant as a mistress. Unable to contain her fear and anger over the situation, Adelina decides to run away. But her father, cruel and relentless, discovers her absence and pursues her in a grim meeting where Adelina discovers that is in fact has powers after all.

She is an Elite.

In no time she finds herself with a band of Young Elites whom society and the Inquisition fear. The Reaper, Star Thief, Spider, The Architect, Wind Walker, The Messanger... these are the Young Elites with extraordinary powers, and they are using them to overthrow the King. They offer to train her, to see if she can control her powers and make them useful. If she cannot, they will kill her because she already knows too much about them. But if she can, she can join their cause and finally have a place where she is accepted and where kindness is shown to her with no strings attached.

But Adelina and the other Elites soon find that she is a well of darkness, fear and hate. Her abilities could grow to be the strongest of them all, and the thought of someone so dark with so much power frightens them.

With the Inquisition holding her sister in return for inside information on the Elites, and her relationship with the Elites on unsolid ground, Adelina is caught in the middle of a dangerous game with many lives in the balance.

My initial thought when I began reading this book was that it was very X-Men-esque, and I wasn't surprised to find that pretty much everyone else had the same thought. Despite the familiar themes, this book felt fresh to me, which hasn't happened in awhile. I enjoyed the world that Lu created. I liked her characters and the way she introduced them.

I liked that there was so much equality in strength among the male and female characters. But I especially liked Adelina. She was so dark and often times hated herself for it. In truth, I think I liked her so much because I could relate to her. She was so human. She was jealous, she was vengeful, she was angry, she was bitter, she was sorry, she was passionate... These are all things that I often feel in myself. The way that Adelina used her feelings and her powers felt realistic to me. I'm usually annoyed with characters for making choices or doing things that I feel aren't realistic (in truth, it's probably because they aren't the choices I would make) but Adelina and I were right on track with each other.

After giving that some thought I decided it didn't necessarily mean I was a dark person with a lot of hate or fear. (I think I'm pretty nice. ha) I think it just meant that I am imperfect person, and that realization gave Adelina so much more depth to me.

There were some things that I felt a little weird about. Like the fact that much of the book takes place in a brothel. That felt a little random and unnecessary, even though there isn't any sex described in the book. Also, the romance between Adelina and one of the Elites, Enzo, felt a little spelled out. It definitely didn't feel natural in the beginning, although I will admit that as the book went on I thought it felt more real and relatable. And finally, WHY does every occasion call for everyone to wear a mask? haha. Every celebration seemed to be a masquerade, making it pretty easy for good and bad guys alike to walk around undetected.

I do hope that in the following books that Lu gives a little more insight to why the fever caused powers in some and why only adults died. Some of the powers are pretty radical and it's hard to believe that a blood fever could make those things happen. I was okay to accept and go along with it in this book, and probably will be okay with it if she doesn't ever explain—but I feel like it would be a relevant and interesting addition.

Lu also kept surprising me with the way she directed the story and I liked that. There were two major surprises for me though. One that I didn't see coming at all, and the second that I couldn't believe initially, but realized that Lu had dropped several hints along the way to help calm her readers down when it hit and build big time anticipation for the following book.

I regret reading this book so soon after its release. haha. Because I cannot wait for the following books to come out and I know I have to wait at least a year between books. I'm not sure if it's because I had to take a two month break from reading with all the stuff going on around here, but The Young Elites felt fresh to me. Not the same old, predictable stuff I'd been reading a lot of that was tiring me out. It was different, darker, had many relatable situations despite the fantastical aspects, and was exciting.

Something that stood out to me in this book was how little food was described. ha. I guess I'm just used to reading more about it. But when Adelina is recovering from her imprisonment in one of the Elite's safe houses, they do describe the first meal brought to her, which included sparkling cordial. So I recommend a sparkling Elderflower cordial with this book.
Posted by Folded Pages Distillery at 1:24:00 PM