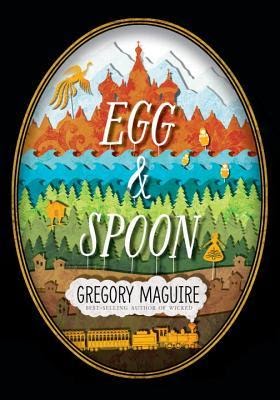 If you're a fairy tale lover, than this one is for you. This is also a great book to read to/with your young kids, so I'm classifying it as middle grade, even though the language is a little more advanced in some places, and the themes might be better grasped by older readers. (I suppose many children's books are that way though, right?)

The tale of Egg & Spoon unfolds in Russia, and really begins when a train carrying well-off passengers is forced to stop in the tiny town of Miersk. Narrated by a monk in prison, the tale of how he ended up there unfolds with the tale of two girls.

In Miersk, before we get around to the train stopping, we have already briefly met Elena, a poor, unlearned girl whose brothers have been taken away for work  or by the Tsar's army, her father is dead, and her mother on the brink of death. There is no food in Miersk, and the people are quite literally starving to death. Aboard the train is Ekaterina, or Cat for short. She's a spoiled, rich, well-educated girl on her way to meet the Tsar's godson in the hopes (her great-aunt's hopes) of making a good marriage match for him.

Elena, a girl close to the earth because of her lowly station in life, believes in magic and that the fairy tales Cat scoffs at, are true. It isn't long before the train starts moving again, but this time, and quite by accident, the girl on the train and the girl in Miersk have switched places. Egg & Spoon takes readers on a journey into the heart of Mother Russia, where something is very wrong and only magic and those who believe in it can fix it.

Maguire folds in characters from Russian folklore that many of us already know and love. We meet Baba Yaga and her house on chicken legs, The Firebird, and the Ice Dragon all whose very lives keep the balance of their homeland.

There is adventure, humor, important life lessons, and most importantly, Magic, in this story. I found it delightful and challenging as a reader. There are a lot of little themes and great one liners in this story, but the main take aways are to live your life and to be kind to one another. I found it a great magical read and one that you'd want to share with your children.

It's pretty long, and there were times when I felt like it was too long. That was really the only negative I had for the book. I think because it's narrated by the monk it can get a little long in some places. The character who shines in this story is Baba Yaga. She's a riot, and all the best parts were the parts with her in it.

I chose Milk as the drink for this book because the whole time we are in Miersk, Maguire details a bitter starvation and want for only the simplest of foods. An egg or a cup of milk. Honestly, it made me grateful for the food that I have and the place that I live. So if you have milk (and aren't lactose intolerant) take a drink and be grateful for the small things we enjoy that many people do not have.
Posted by Folded Pages Distillery at 2:02:00 PM