The Most Dangerous Book Review 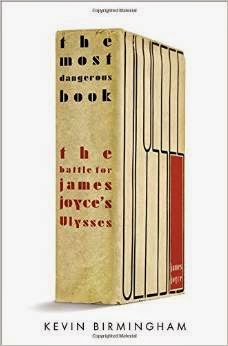 The Most Dangerous Book succeeds not only at chronicling the making of James Joyce's Ulysses, but it envelops whole movements of the time including modernism, egoism, anarchism, and dadism. It also provides a stirring portrayal of how arbitrary and shifting our sense of what is obscenity and what is art can be. It made me realize how fortunate we are as readers and writers today, despite arrests due to Wiki Leaks and what not, because we're allowed so much more freedom in the Western world.
The journey the book takes can be exhausting to follow, not because Birmingham's writing is obscure (it isn't), but because so much effort went into bringing Ulysses into existence and then defending that existence. There is of course Joyce's contribution of jotting down little phrases on scraps of paper and systematically entering them into the book for years at a time. His structure included mapping events in a single day in Dublin to Homer's Odyssey as well as a body organ, color, and more for each chapter. There are the famous oversized galley sheets which Joyce continued to write on rather than merely make edits, driving away typesetters repeatedly. Without patrons like Harriet Weaver and publishers like Margaret Anderson and Sylvia Beach, Ulysses never would have gotten anywhere because no one, other than these women, would risk jail time and heavy fines to publish what much of the world at the time considered to be smut.
The hardest parts to read were James Joyce's letters to his non-wife, Nora, which despite being presented in a staid fashion, were embarrassing to read for their vulgarity and Birmingham's lurid descriptions of the operations Joyce had to undergo in order to correct his iritis which were incredibly painful. The most fascinating part was when Judge Woolsey, after fifteen years of Joyce having to smuggle copies to his buyers due to the outcry against it, did a complete about-face and judged Ulysses as an "astonishing success."
James Joyce is best summed up by the sentence, "The qualities that made Joyce an excellent writer made him a ruthless human being." I wouldn't want to meet Joyce in person. He seems belligerent, arrogant, and crude. He was stubbornly resistant to making any changes suggested by editors. But his art is so forceful, so intentional, that the world could not ignore him. Having read Ulysses, Birmingham did an admirable job of summarizing and selectively quoting from the book to give an informed flavor of what the book represents.


The drink I would choose to pair with this book is a century-old sherry which is the drink that Birmingham conjectures Judge Woolsey drank as he sat down to read the entirety of Ulysses. This drink wins out against any other drink others may have drank because Wooley was one of the few who accepted Ulysses while others loathed it. I'm breaking the no-alcohol tradition of this blog because Joyce's book is not for kids.