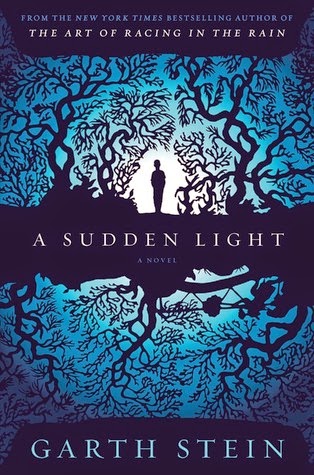 
A Sudden Light follows Trevor Riddell, and commences with him telling his coming of age story to an unknown audience. Trevor is looking in particular at the summer of 1990, when he turned fourteen and saw the great Riddell estate for the first time in his life. Jones Riddell, Trevor's father, went back to drag up the bitter memories of his past at the Riddell estate with one goal in mind: sell off the property to be developed and divide the profits with his sister, then send his emotionally abusive father to a graduated living facility. Trevor supports his father in as much as it means that his parents will no longer be bankrupt and they will happily reconcile from their trial separation instead of ending in divorce. However, Trevor uncovers details from the Riddell family legacy that make it seem impossible to give his father what he wants. The results drag him into a world of ghosts, curses, and deranged family members with dark secrets.

A Sudden Light captured my attention from the beginning because it is a modern-Gothic tale with an interesting twist, the protagonist is a male teenager instead of a female young adult. This important detail makes for some interesting differences when comparing it to classic Gothic themes, such as the roles that curiosity and seduction play upon protagonists in Gothic spaces. Garth Stein pieces together a vivid and rich setting that draws all of the characters together, forcing them to face the things they least want to face. This connection between setting and character creates complications within the family's struggle to move on with their lives while carrying the baggage they each have picked up from their pasts. I enjoyed how Stein braided together the past with the present, as well as the connections between people vs. their connections to their settings.

I did have issues with some aspects of the novel, for one I didn't find some of the actions of fourteen-year-old Trevor believable. I understand that Trevor's voice is that of his older self reflecting on the past and can overlook some mature/self-reflective moments that also seem beyond a fourteen-year-old. However, the actions that Trevor took seemed beyond his years as well and made me question at times whether Stein truly meant for his character to be older, closer to seventeen maybe. For instance, how many fourteen-year-old teenagers are genuinely interested in their family history, let alone going to the library and searching through archived newspapers in order to find more information about certain ancestors? Maybe I'm not giving fourteen-year-old teenagers around the world their due and am assuming too little of them though. I found it conceivable that a fourteen-year-old would be naive enough to believe that money would simply fix all of his parent's marital issues, but when Trevor took so many other actions beyond his years and thought things through in such a mature way I found it annoying when this blindness to his parent's relationship would come up over and over again. Overall, these issues were easy to ignore and negligible in comparison to the novel as a whole.

Some reviewers have brought up issues with this story being told before, but I found it captivating and different enough to be a good quick read. Honestly, in the end it seems that all coming of age stories have been told before. I found the twisted Gothic themes in this one, including the dark ending, to make it stand out in my mind and become something that felt new to my reading experience. I also found the ending satisfying, it tied up what needed to be tied and left some parts loose for one's own interpretation. I highly recommend this book to those who enjoy Gothic themes, coming of age tales, ghost stories, or narratives surrounding dysfunctional families. I plan on reading it again in the future.

Lemonade is an obvious choice to anyone who has read A Sudden Light. This drink is bitter and sweet, taking one of the most sour foods and creating something refreshing from it, thus the saying: "When life gives you lemons, make lemonade". The youngest character and the oldest character in the novel drink lemonade almost constantly (most often together), connecting them again with a piece of their setting. If you think  about it, lemonade is one of those drinks that is truly accessible to the old and the young. Children open lemonade stands, adults buy and drink the lemonade with the children. I think this drink symbolically connected the characters who drank it as well, overcoming their differences in past and age.
Posted by Folded Pages Distillery at 10:13:00 PM