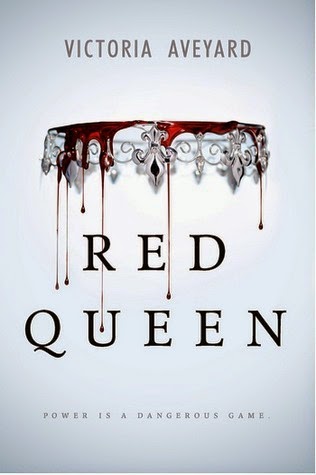 So much hype for this one, and it didn't live up in my opinion.

People are saying this is Graceling meets The Selection, but I think it's more accurately compared to X-Men meets The Hunger Games.

Mare Barrow is a Red. In a world divided by blood, the Silvers are silver-blooded people born with powerful superhuman abilities. They can manipulate the elements, the mind, the world around them with their talents. Those who bleed red are born without the talents, so they must serve and be viewed as a lesser people.

Mare's three brothers are sent to ongoing, ever going, war, and Mare will be sent too when she comes of age because she doesn't have a job to keep her home. Mare's only talent, it seems, is theft. One evening, Mare picks the wrong (or right?) pocket, and in a sudden twist of fate, she finds herself working as a servant in the place.

By accident, Mare finds out she has a superhuman ability of her own, lain dormant her entire life. Unfortunately for her, the ability becomes manifest in front of an audience, and the merciless King and the evil queen force Mare into a dangerous game for her life, by manipulating and using her for their own agendas.

The Reds are no longer satisfied living under the iron rule of the Silvers and the Scarlet Guard rebellion has begun hitting the Silvers in places they can't ignore. Mare suddenly finds herself in the middle of two dangerous worlds, where no one is what they seem to be. Of all the lessons Mare is learning in the palace, the most important one is that anyone can betray anyone.

This sounded so good... but ended up being so very predictable. So. So. Predictable. I felt like I was rereading several other stories I had already read. I was told there was a giant twist in this book that would blow my mind, but the truth is, I saw that "twist" coming a mile away. Aveyard was not very subtle in her hint dropping or foreshadowing and knowing what was coming so early on took much of the excitement out of it and ended up making it more of a chore to finish.

I did enjoy the new world Aveyard created, even if it was downright cruel. Aveyard is definitely not afraid to kill her characters! I liked the characters, even though they weren't that complex. I even think that the book is worth the read. It was enjoyable enough. But I am getting really tired of this same dystopian/rebellion story line. I'm tired of the love triangles (although there were THREE men and one girl in this one). I'm tired of the girl with the secret special powers and blah blah blah...

Since this storyline was so familiar, I automatically expected a few little details to pop up. Like how the girl thinks she's plain and ordinary, yet everyone else thinks she's amazingly gorgeous. Stuff like that. And thankfully that didn't pop up. So I did like that Aveyard avoided some of the little cliches that come with the storyline she chose to write.

I think this story is a good variation on a theme. If you're new to the genre and the storyline, it will be far more awesome. If you've read this storyline a million times like I have, then it's okay. I will say that there was one surprise for me, and it came literally on the last page. So she did manage one surprise!

I chose sparkling cider for this because Mare drinks a golden bubbly drink during one of the feasts, but it never really clarifies what kind of drink it is. I also think that sparkling cider can be deceiving to the eye. It's often drunk out of fancy glasses or flutes and can appear as beer or champagne. I think that is perfect for this, because Mare is not what she appears to be. They've dressed her up as a princess, but the reality is that she is far from being what anyone thinks.
Posted by Folded Pages Distillery at 10:34:00 PM