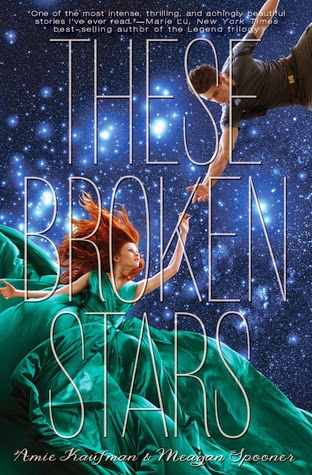 First of all, this cover is gorgeous! Right?

This book came highly recommended to me from several different friends and sources, so of course, I approached it with caution. Lately I find that the more the hype, the more disappointed I am with the outcome.

These Broken Stars lived up to the hype though.

Tarver Merendsen is a young, newly decorated war hero traveling on board a luxury space liner, the Icarus. Lilac LaRoux is the spoiled, rich daughter of the most powerful man in the universe. (yes, the entire universe.) But Tarver doesn't know that. So when he foolishly approaches her on the Icarus, he's surprised at how quickly she laughs in his face for coming near her. He is, after all, so beneath her in upbringing and status.

But suddenly the Icarus is torn out of hyperspace, a dangerous thing to happen to a ship traveling at that speed across the universe, and the ship comes crashing down onto the nearest planet. Somehow Lilac and Tarver end up in the same escape pod, and are only catapulted from the ship because of Lilac's quick (and surprising) knowledge of mechanics.

Tarver and Lilac survive the disastrous crash, and land on a strange planet together. Since Lilac is the only daughter of the the most powerful man in the universe, she knows he'll come looking for her, and Tarver is counting on that fact too. But there is something eerie about the planet, and it doesn't look like help is coming like they anticipated.

Tarver and Lilac go on a journey to find their way home, which isn't easy because they absolutely despise each other.

THIS BOOK! I so enjoyed the character development and growth in this. That alone was one of my favorite parts. But there was so much more. This story is complex and very well written. I have read way too many predictable story lines lately, and this one kept surprising or completely shocking me. There were things that were going on, or things that happened that just blew my mind. I kept wondering just how the authors were going to get out of the situations they were getting the characters into. I was so afraid there would be a dumb resolution. An easy out. There never was. I felt like they resolved each of the crazy and impossible situations with justice.

This story is building up to one main event. The thing that is driving Tarver and Lilac across the planet. It was creepy and a huge mystery to me. I was so afraid that when it came time to learn what was really going on, it would be stupid. I was happily surprised that it was not stupid, and totally lived up to the build up.

I found that I was surprisingly emotional during the last 70 or so pages of this book. Like, on the verge of tears. I think the authors did an excellent job with this book and it was so refreshing to read something so well done and so surprising. It comes highly recommended from me now too.

I recommend drinking Tang with this book. Tang was invented for the Space program, and during this whole book Lilac and Tarver are living off of space rations. It might have been a nice little treat for them, considering how hungry they always were!