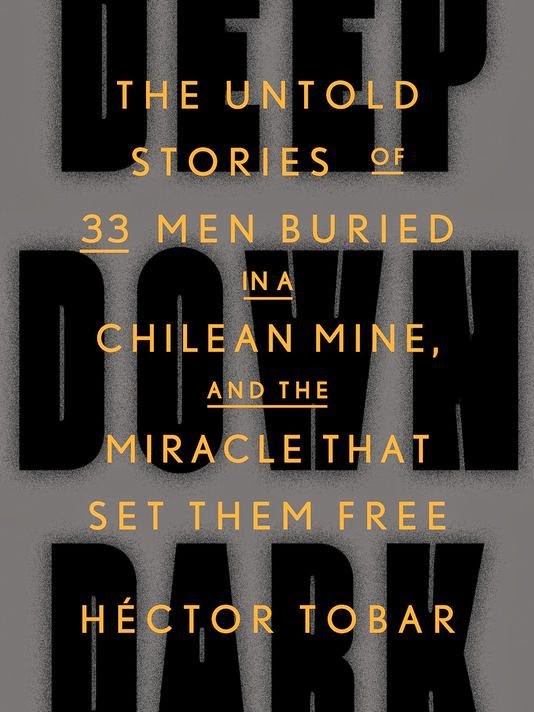 
Deep Dark Down: The Untold Stories of 33 Men Buried in a Chilean Mine, and the Miracle That Set Them Free
by Hector Tobar
Farrar, Straus and Giroux; 1St Edition edition (October 7, 2014)
320 pages

On August 5th, 2010, 33 miners got trapped deep in the Chilean mine they work in. It took 69 days to get them out again.
Even though this was a real story and I already knew the outcome, I felt like I had to read it quickly so that the 33 men trapped in the Chilean mine wouldn't be trapped as long. You might think that an account of being trapped for 69 days would be dull since the men don't have much to occupy themselves with other than the dominoes game they created for themselves. But actually it was fascinating to witness the psychological drama that evolved over that time. This book was outside the comfort zone of what I normally read, but I really appreciated the opportunity to learn what conditions are like for the miners we so often forget when we switch on the light, albeit in a particularly harrowing situation.

What became all-important in a survival situation such as this, was their access to food, water, and light. The miners had one can of peaches, one can of peas, 18 cans of tune, 24 liters of condensed milk (8 of which had spoiled) and 93 packages of cookies. They rationed as best as they could, which most of the time was two cookies per day. They only had ten bottles of water and quickly had to resort to drinking the oil-tainted industrial water used to keep their engines cool. They were able to replace the batteries of their helmets using some of the engines of machines down there.
They also began to gather for a daily prayer, despite different religious backgrounds. One of the men became their de facto pastor, saying they are being tested because they have sinned. The daily prayer sessions also became a chance for the men to apologize to each other over any careless act. One man apologized for raiding the food at the beginning of their entrapment.
After 17 days, the rescue team succeeded in breaking through the rock and finding the men alive. But the hole is only 4.5" so they could only send small articles like letters and food down; they couldn't bring anyone back up. Even though this felt like a climax, this is where the difficulty really began. Before this, with rations down to one cookie a day, the men were too close to death to fight amongst themselves. After they get real food in them, the men started to have arguments among themselves.
Whenever I read biographies like this, I always want to know how the final book was constructed. The author pieces together interviews from the miners and their families into a very coherent account. It is clear the author has done such in-depth interviews that he even knows what their poop looks like after not eating a solid meal for 17 days (resembling llama pellets for those who want to know.) It feels very much like we are down there with the miners as well as camped above with the distraught families. It is easy to forget that the author was not down there himself except for the even-handed way he tries to describe all the men and their families. He also smoothly pulls off writing in present tense even though the quotes are in past tense.
One of the moments that most stuck out to me was that when they were first getting nutrients from above ground, the men only got glucose gel because rescuers had learned from Holocaust survivors that if you give those who have been starving normal food this can cause cardiac failure. So the drink to accompany this book is a bag of glucose gel.