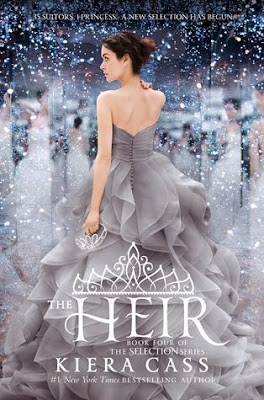 Eadlyn Schreave beat her twin brother into the world by a mere seven minutes. And coming first means that she’ll be Queen thanks to her parents changing the rules for her sake.

But the truth is, Eadlyn isn’t grateful for the chance to be making history as the first woman with full right to the throne. It’s exhausting, hard work. But despite not really wanting the pressure and responsibilities of the throne, Eadlyn will be the first to claim the respect she feels due her and the power. In short, she’s a spoiled brat. Her parents, King Maxon and Queen America made history of their own when they dissolved the caste system after their marriage, but 20 years later it isn’t going as smoothly as they hoped. There are still those who treat people as if the castes still exist, and the people are angry enough for an uprising. .

With unrest in the country, Maxon and America decide that maybe it’s time for a reason to celebrate by having Eadlyn participate in a Selection of her own. 35 eligible bachelors of the kingdom will complete for a chance to marry her. But what happens to the Selection when the spoiled Eadlyn doesn’t want to marry?

I came into this reading with extreme low expectations. I had heard that Eadlyn was awful and was already disappointed the story wasn’t about Maxon and America. Maybe it was because of the low expectations that I enjoyed this more than I anticipated.

Eadlyn has room for some serious character growth and I’ve enjoyed her journey. I have 3 top favorites boys for the Selection, and it was fun to be “in” on all the little things between Maxon and America that went unexplained in the story.

The thing I hated was how rushed everything was. There will only be this book and one more for Eadlyn’s selection with a lot going on. The big cliff hanger at the end felt more like an explosion of events that left me annoyed and tired, rather than on the edge of my seat. I can’t imagine how it will all be tied up and done well, but here’s hoping.
Posted by Folded Pages Distillery at 2:07:00 PM