Fish In a Tree Review 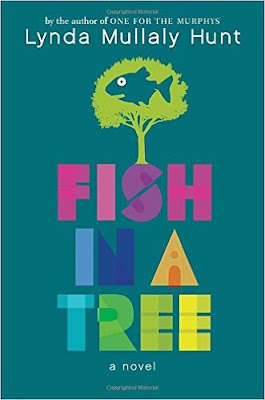 Distiller: Doni Faber
Rating: 5/5 Stars
Cure for: Being a Misfit

I absolutely loved this book! Reading it made me feel like I've been too generous in the past by giving other books fives.
Ally has dyslexia. But this is a book for anyone who feels like a misfit. It captures so perfectly the pain of not fitting in with kids at school as well as the complete awesomeness when people stand up for others.
It is rich with similes like this one: "'I miss Grandpa,' I say. Three words that hold sadness like a tree holds leaves.'" And this one: "The corner of Albert's mouth twitches, which is like someone else doing cartwheels down the hall."
Part of what I like so much about Ally is that she is so different from me. Words swim in front of her, make no sense and give her headaches. But she's highly visual. She keeps a Sketchbook of Impossible Things, inspired by Alice in Wonderland that her Grandpa read to her when she was younger. She'll draw things like "a pet llama named Butch Cassidy. With a name like that, I give him a cowboy hat, a bandana, and a holster. But in the holster he carries an ear of corn."
Another vibrant character is Albert, the "professor" of the classroom. He's incredibly smart, kind, and doesn't give a crap about being made fun of. In one of his exchanges with Shay, the classroom bully, he says, "'Actually, . . I don't take my appearance lightly. I take you lightly."
Ally has gone to seven schools and seven years and always gets in trouble because she's too embarrassed to admit her reading problem to anyone. She starts out the year eating alone in the cafeteria. And as she so aptly says, "There can't be any place on the planet scarier than a school cafeteria." But soon, she, Albert, and Keisha, someone who often stands up against Shay, have banded together into the "Island for Misfits."


This is a great book about overcoming obstacles, finding true friends, and learning more about yourself. I highly recommend it to everyone. But as Ally says, "In this world of words, sometimes they just can't say everything."
Posted by Folded Pages Distillery at 12:13:00 PM