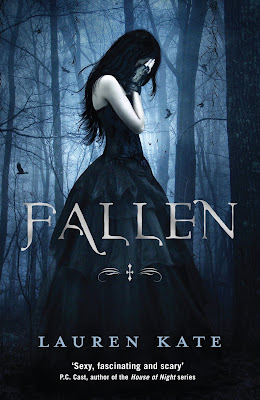 I can understand now why opinions and reading tastes on this book/series are so polarized. Unfortunately, after reading “Fallen”, I find that I am in the “less than impressed” camp.

I battled between 2 or 3 Stars for this one, finally deciding that the idea for this book was pretty cool and interesting PLUS there was enough that had me curious to push through, to up it to a 3 Star read.

….
Seventeen year old Lucinda “Luce” Prince finds herself trapped behind the camera-monitored rusty gates of Sword&Cross reform school, after she is accused of murdering a boy with fire.

Not to mention that she’s been seeing dark, ghostly shadows all her life and she might be borderline mental anyway.

But her time at Sword&Cross isn’t exactly torture, thanks to two gorgeous boys. Cam, who is suavely vying for her attention, and Daniel, who seems like he can’t decide if he hates or likes Luce at all.

There is more to Cam and Daniel than good looks, and soon Luce finds that there might be more to her too. Turns out the story that these three are playing out goes back thousands of years, and things are about to get crazier than Luce could ever imagine.

I was VERY intrigued by the idea behind this story. Enough so that it propelled me through the first half of the book, eager to understand what was going on. But then the answers never came… and never came… and every explanation was cut off somehow… and then the book was over. I was less tantalized by the bits of offered information and more annoyed and fed up with it.

Lauren Kate’s writing style also isn’t for me. I found the foreshadowing painfully obvious and everything was all tell, no show. Since I’m personally over the wild, inexplicable, obsessive love between characters for no apparent reason, I struggled with much of this book. There was just too much in this book that happened without explanation or lead up for me to want to give it more attention.

I also felt little connection with the characters and found them to be pretty flat.

Anyway, as you can see, it obviously wasn’t for me. I wish this cool idea was better executed. I’m going to take a break from the series to do some other reading before diving into the second book. If the second book follows the same pattern, I will probably give up the series. At least the covers are gorgeous! haha.

What books ended up not being your type, even though many other people really loved them?
Posted by Folded Pages Distillery at 11:29:00 PM