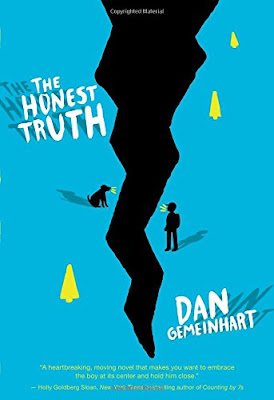 
The Honest Truth reminds me of a better version of American Beauty. Like the teenager in American Beauty who videotapes a plastic bag blowing down the street, Mark takes photos of significant moments, trying to capture their significance and beauty. Unlike American Beauty, The Honest Truth does succeed in being redemptive. Mark has a lot of painful trials to help make him into a stronger person.
Honestly, I loved the tone of this book. It was stark and harsh. It starts off by saying, "Life sucks. That's the truth." I can't remember ever reading another kid's book that was that pessimistic. But the kid's got reason to be pessimistic. He has terminal cancer. It went into remission, but now it's back. He's looking toward another round of treatment. Except he's not. He's done. He just wants to die the way he wants to die: by climbing Mt. Rainier. Does this seem crazy? Yes. But people make crazy decisions all the time, so it was believable. His dying grandpa urged him to climb Mt. Rainier in his stead, so that's what he's set out to do.
The really amazing component of this book was his relationship with his faithful dog, Beau. Mark packs him in his duffel bag and Beau faithfully follows him through his misadventures. Mark may have a death wish, but if anything were to happen to his poor, little dog, I would be really, really mad.


This read is a classic struggle against nature and a struggle against oneself. At first, I wasn't interested in reading because it was about a really sick kid and that sounded too heavy. But this kid isn't mired in self-pity. It propels him to take his life into his own hands and really live for as long as possible.
Posted by Folded Pages Distillery at 11:22:00 AM