I have reviews for each book written out, but I thought I would do a full series review for now, instead.

I have a lot of feelings about this series and they are all over the spectrum.

This story follows Blue Sargent, the daughter of a psychic, living in a house full of women psychics. But Blue herself has no psychic ability. Her talent is amplifying those powers. For as long as she can remember, she's been told that her kiss will kill her true love.

Enter the Raven Boys. The Raven Boys, in short, are supremely rich boys who attend Algionby Private School for boys. The raven crest on their fancy school uniforms is one of many ways that Blue recognizes their kind and despises them. But it seems that four Raven boys, Richard Gansey III, Ronan Lynch, Adam Parrish, and Noah Czerny, are fated to be in Blue's life, because they keep popping into her life with their own magical and psychic journey.

Let’s get first things first: If Harry Potter made it on the banned book list because of witchcraft, The Raven Cycle is BANNED.

I don’t do horror or haunted. I can’t live with that kind of stuff in my mind. But this book is horror and haunting and you don’t even quite realize it until it’s too late. At least in my case. Each book gets progressively darker and creepier. I made it through 3.75 books in this series before having my first real nightmare in years and years. (fist bump to Ronan Lynch)

That being said, I think that if someone like me, who struggles with the creepy, could handle this with intense interest it was well balanced with enough "other" to offset this being too dark.

I am not the type of person who would ever have my cards read. That whole thing just creeps me out. However, it was extremely interesting reading about a house full of women with psychic abilities and how those beliefs and powers became the backbone of this story.  This entire book and story is based on psychic powers and “witchery”. It’s super fascinating and then it’s extremely terrifying.

Second: I understand completely why some people are obsessed with this series and why some people give up after the first or second book. This book is a patchwork of incredibly interesting elements, a set of incredible characters, and has incredible and powerful moments written into it. Moments that give you chills because they are so powerfully awesome. Moments where you feel and understand the scope of the magic and the magnitude of the story in an epic way. And all through those amazingly magical moments is woven this incredible friendship. I think that overall, when people find themselves obsessed with these books, it is actually the characters that they are obsessed with. I know that I am.

Third: Plot and story. This is the vehicle that drives and connects all the amazing development with the characters. However, each book left me feeling a bit unbalanced. Like, why am I so obsessed with these books when I feel so unsatisfied with the plot? It's so hard to say you don't like one without the other because of how closely they are tied, so it's hard to explain.

Fourth: The Raven King was one giant bit of confusing. I dig Maggie Stiefvater’s writing style for the most part of this and I love her brand of humor. I thought the writing and the execution was clever and it made an impact on my reading experience in a really positive way. But so much of the final story felt confusing. I kept rereading and reading slowly because I didn’t feel like I could actually grasp what was happening during some of the moments. And then there were a couple characters that I could not understand their presence in the story at all. In fact, the presence of our final villain was majorly disappointing to me.

I cannot help but have ended The Raven King immensely disappointed. It felt like everything that happened erased the first three books and my entire understanding of the story. I actually felt cheated. I couldn’t understand the direction of the story and so many things that happened felt contradictory or like a cop out. It honestly felt like a jumble of plot lines that met dead ends. There were characters that just disappeared at the end. We don’t know how their story resolves. (I have very specific points, which I won't spell out here to keep this spoiler free, but please message me so we can talk about it! Maybe someone can explain to me what happened here.)

How can this be the ending to such a cool cool series?

I know that many people were obsessed with the ending, but not me.

However, I found this series to be immensely entertaining and horrifying. I thought it was clever and unlike anything I had read. I continue to be obsessed with The Raven Boys. Ronan and Gansey will forever be my BrOTP.

There is a small part of me that wished I hadn't read The Raven King and stayed in that blissful space where I was enamored completely with the entire thing. I love this series and I hate what happened to it in the end. I do recommend this series though. I think you’ve got to try it out and see if you like it. What did you think of the ending? 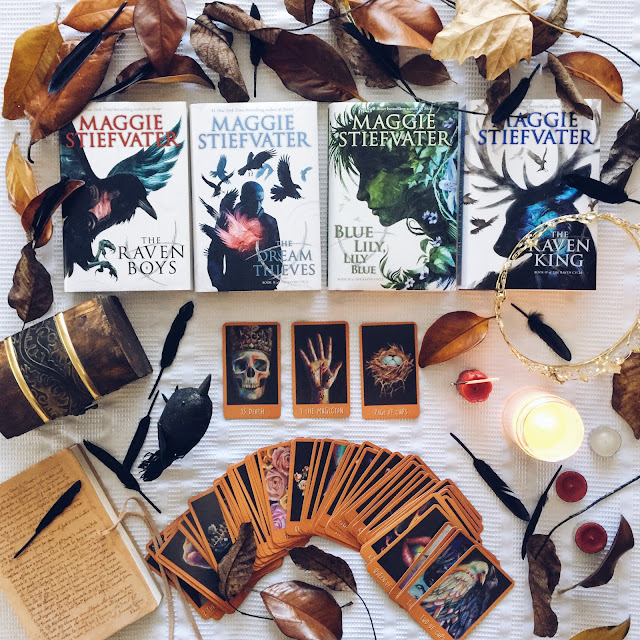