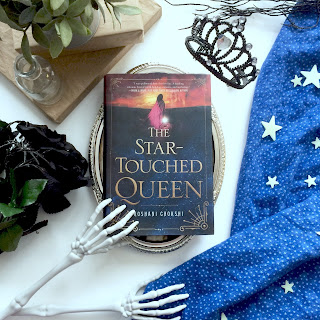 
At the end of September Cambridge Public Library hosted the Boston Teen Author Festival.  They had 35 young adult authors come, talk through panels and sign books.  The book festival was amazing and both the authors and panels were fantastic.  It was there, prowling over the book table when I saw "The Star Touched Queen" and since I wanted something romantic, royal, and other worldly it seemed perfect. ... but I really knew nothing about it.

Then I went to the panel where Roshani (who is lovely) talked all about growing up in a home with Hindu influence and how her grandparents had horoscopes drawn up for all of their the grandchildren.  She talked about how she has her horoscope but doesn't dare to read it because she doesn't want to know and doesn't want it to influence her.

Anyway, her panel was fun and it made me really excited to read her book when she talked about it being a Hades and Persephone retelling rich in Hindu mythology.

I started reading the book while waiting for my ride home from the festival.

The book follows the story of a Hindu princess (Maya) who's grown up locked behind a harem screen, cursed with a horoscope that promise a marriage of death and destruction.  In her father's kingdom she hated and the scapegoat for everything that goes wrong in the palace.

Soon enough she's married off to a foreign prince and she becomes queen of land more curious and incredible than she could have dreamt.  She also find herself unexpectedly valued by her strange husband and realizes that there is an untapped power is within herself.

But the kingdom is riddled with both secrets and locked doors and Maya is starting to hear whispers in the darkness.  She doesn't know who to trust and if she choose wrong the entire world could be at stake. 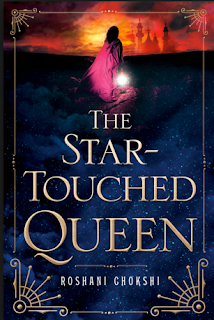 First the good: This book was rich in culture.  I loved reading about Hindu beliefs and having that woven into the Persephone story was a lot of fun.  It was full of reincarnation and horoscopes stories, and interesting to read about how the dead had to atone for their misdeeds before they could move on to the next life. The book was also filled with mythological creatures that I'm not familiar with and it was fun to learn more about the culture just having them woven into the story.

I had a bit of a problem following some of it.  I don't follow horoscopes so their importance and even the basic of them were lost on me which was a bummer because they were a key part of the story.  I also felt confused by Maya's decisions. She was powerful and hot headed... and often seemed angry without a cause, and that anger led her to made choices that made me roll my eyes because it seemed a little too contrived.

The book was very poetic in its descriptions (which can be good or bad?) to me it felt flowery, distracting and sometimes a little overwhelming.

In summary, the book was a fun unique spin through the Hindu culture and I felt like I learned some interesting cultural things in an authentic way.  The story line was good, and the book ends in a place where it could easily be a stand alone or it could work with more books in the series. Maya's personality and reasoning was a little confusing and I felt like she made obnoxious decisions/judgments just to progress the storyline.  All in all I enjoyed reading it, but I don't have a driving desire to read the next in the series (if there is one).
Posted by Brittney at 3:57:00 PM