There But For The Review 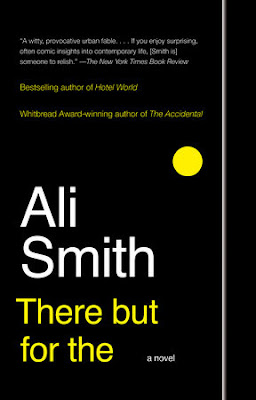 
So, if you've been following my reviews, you know there was a time when I did bibliotherapy. This is where you use book suggestions as a cure for whatever ails you. I got this idea from The Novel Cure by Berthoud and Elderkin. All But For The is their suggested antidote for fear of dinner parties. I absolutely loved this book. Intelligent, quirky, delightful. I'm not sure it cured my fear of dinner parties, but it definitely increased my penchant for getting to know people past the superficial level that dinner parties often limit us to.

A man, Miles, comes as a guest to a dinner party and locks himself in a room. He stays there for months. At first, his hosts have nothing but resentment for their uninvited resident. When the story is broadcast to the news, Miles develops a cult following.

We learn the story through the perspectives of other characters, all with fragile tethers to the man. Anna K. is called in to try to get him come out of the room. She is the only person he has contact info in his wallet for. But she barely remembers Miles from a group trip she went on as a youth. Mark, invites him to the party and is mistaken for his partner. But he and Miles just met that evening. May, is an old lady whose daughter he once dated. She has Alzheimer's and scarcely remembers anything, let alone Miles who visits her once a year on the anniversary of her daughter's death. Brooke is a precocious ten-year-old who was at the dinner party. She ends up connecting to Miles more than any of the others.

The tenuousness of the connections is itself fascinating-- the idea that a person could make a large impact on someone else while the other person scarcely remembers. The characters too are fascinating stylistically as well as persons. For example, Mark has a rhyming voice from his deceased mother in his head. No one would guess this were they not privy to his inner monologue. Similarly, we usually see the lapse of memory in Alzheimer's, but don't have access to the many trains of thought that are still present in the person. Having access to these characters' thoughts feels like a distinct privilege in each case.

When we get to the scene of the party, it is so strained not only between different guests but also between couples who have arrived together, that it's no wonder why Miles would recuse himself from the party. Why he would remain in the house for months afterwards is left up to interpretation.

The title is a reference to the proverb, "There but for the grace of God go I." It refers to a group of prisoners being led to execution and more generally, that our fate is not entirely in our own hands. It seems that Miles has taken this idea and run with it. If his fate is not in his hands, why not put it in the hands of complete strangers? He acts as though the content of his life is completely arbitrary and by so doing, propels himself into the public eye in a way that he never would have if he tried to take his life in his own hands.

I'm grappling with how to convey how awesome this book is. One of the things I loved is that it has a lot of language play. Each section is about a single word in the fragment: "There," "But," "For," and "The." "There" conveys a bit of backstory, but also emphasizes the setting Miles inhabits-- arbitrary, yet so much more permanent than ever intended. The trip that Miles and Anna took was a prize for winning a story contest. Miles wrote a story that began, "There was once, and there was only once, he says. Once was all there was." "But" is the wrench in the spoke, Mark, who invited Miles on a whim, and thus changed the trajectory of many people's lives. "But" is also a reference to the butt of jokes. Mark overhears the other guests laughing at his expense about his famous but not-so-sane mother when she was still alive. "For" is perhaps the rationale, the reason that he did it-- a girl who died in her youth, though this hardly seems like a satisfactory reason. And "the" is the historicity of the situation and the brazen straight-forwardness of a child who can cut through all the hype and meet the man as he is.

If you like literary pieces that are well put together, books that are clever for fun and not smug, you will like this book. I hope you get the sense from this review of how much substance there is to this book.

Email ThisBlogThis!Share to TwitterShare to Facebook
Labels: Ali Smith, Contemporary, Doni Faber, There But For The