The Empress (The Diabolic #2) by S.J. Kincaid {Review by Brittney} 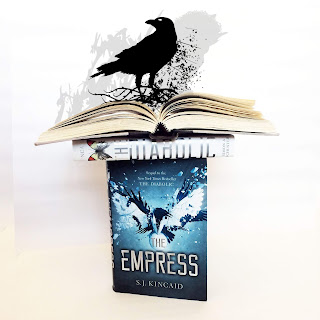 
If you like dystopian, court intrigue, a romantic subplot, and space this book is probably a good fit for you.

I read the Diabolic a couple of years ago and was very surprised to love it.  I enjoy dystopian stories, I like a good romance side plot, action, and intrigue... but I'm kind of lukewarm about the galactic space setting, and space ships in general.  So I went into this series with a bit of trepidation.

I'm pleased to say it was ill-founded.  Yes, this happens in space, both on planets and (a large part) in massive space ships.  Zero gravity plays a small role, space flight a larger one etc.   Some people live and die for that, but it's not really my thing.

However, compelling characters, interesting plot arcs, and intense intrigue where things are constantly going from bad to worse, where you've got your tissue wrapped up in a knot for worry about your characters and you can't guess the ending from the middle or even the 3/4 zone.  That's what I'm in for, and this series delivered.

I'm going to go ahead and assume you've either read "The Diabolic" (the first book in the series) by this point or that you don't mind spoilers for it if you continue reading because I'd like to give you my thoughts on The Empress.

First, how could a second book live up to that first book? Especially when the ending was smooth enough it could have been a stand-alone -  I think that was what took me so long to pick up the second book, and then I was kicking myself for not doing it sooner.

The book kicks off with Nemesis and Tyrus side by side trying to eek out their new life together and the heavy roles of Emperor and his betrothed (soon to be Empress) but the vast majority still don't view Nemesis as a person and therefore she cannot be married to Tyrus and lead by his side, at least not without the church's permission.

Something Tyrus would be fine moving on without.  But there is a catch... he might have the scepter and be named Emperor, but the scepter, that should be working with him to control all the ships in the fleet is unresponsive and will remain that way until he pleases the church enough for them to grant him power over it.

This book is a power struggle, but not the one I was anticipating.  Enemies and friends are not certain, and as always control goes to the most clever.

This book had me meteorically twisting up napkins, on the edge of my seat and so invested in my characters.  I loved watching them change, and their relationships with each other. There was nice side dish or well written romance. And I loved this story going off the deep end in terms of plot and rocking my world.  It was unexpected and wonderful, and the ending left me dying for the next book. 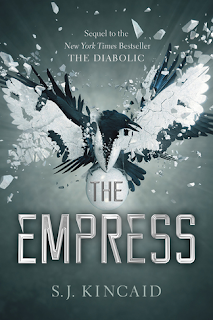